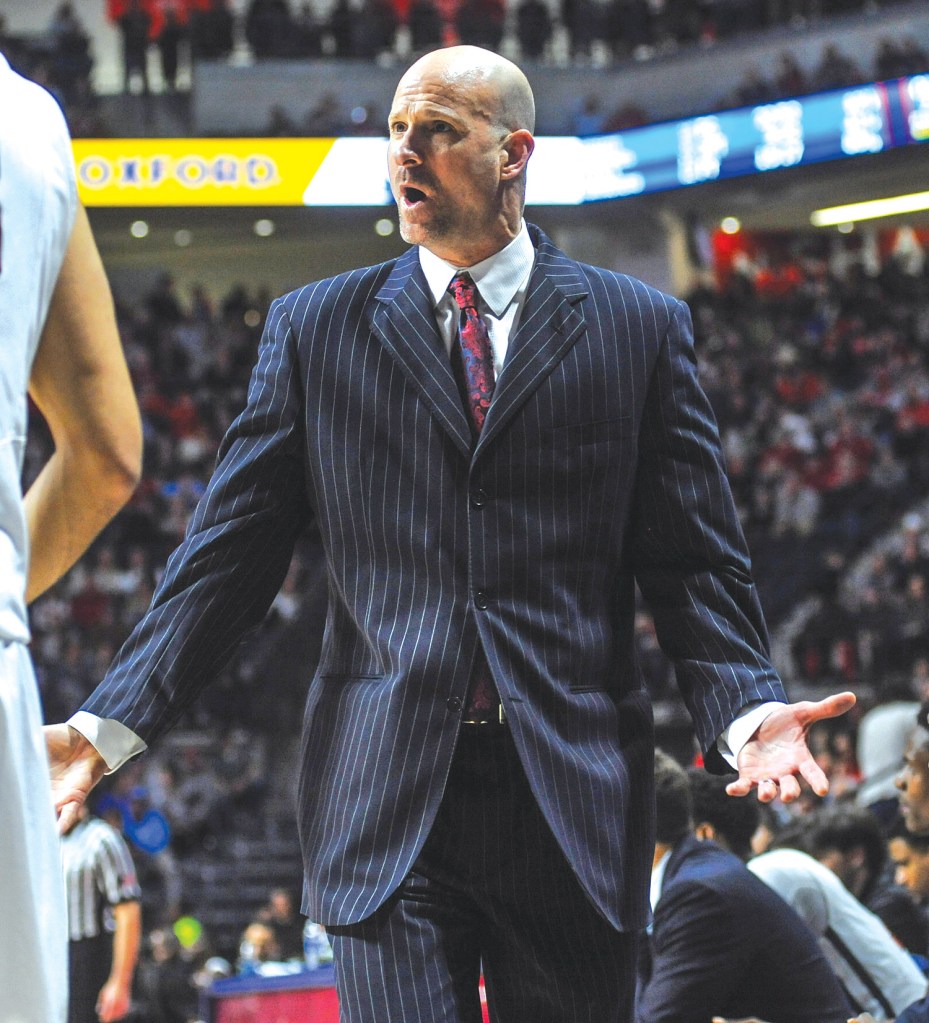 Ole Miss men’s basketball coach Andy Kennedy is getting an early look at four of his signees this summer while two more will be on campus in August. (Bruce Newman)

Two of them are playing for their respective national teams, but the other four members of the Ole Miss men’s basketball team’s most recent signing class are on campus going through workouts.

An alteration to NCAA rules in recent years allows coaches to work with players during the summer for up to two hours a day for up to eight hours each week. The time has allowed the newcomers a head start on learning the Rebels’ system and terminology while also giving head coach Andy Kennedy a chance to get an early idea of how he may want use some of his newest pieces on a team that lost seven scholarship players off last year’s roster, including the Southeastern Conference’s leading scorer in Stefan Moody.

“This summer has given us an ability to work with our guys to basically put in some foundational stuff,” Kennedy said. “As we come back in the fall semester and we have our full team together, we’ll start identifying really the identity of this team offensively.”

The degree of sophistication at the college level varies for the group.

A graduate transfer from New Mexico, Cullen Neal will immediately step in for Moody and give the Rebels an experienced presence at the point. Neal graduated from UNM in June and arrived on campus earlier this month after averaging 12.3 points and 3.7 rebounds in 31 starts for the Lobos a season ago.

The game of the 6-foot-4 Neal is vastly different than that of the bouncy 5-9 Moody, but the Rebels are still counting on the junior to create a formidable, new-look backcourt duo with sophomore Deandre Burnett, who sat out last season after transferring from Miami.

“(Neal) is a guy at 6-4 and 195 pounds that’s logged a lot of minutes,” Kennedy said. “He’s played in real games. We expect him to be able to make the transition pretty seamlessly into what we’re trying to do.”

Forward Justas Furmanavicius has been with the team all summer after signing with the Rebels out of Three Rivers Community College in Connecticut. At 6-7, Furmanavicius is an option to fill the void left by Anthony Perez as an alternating small or power forward depending on the matchup.

Furmanavicius’ ability to break down defenses and create for himself and his teammates may be his biggest asset, Kennedy said.

“He can stretch you and make 3-pointers, but I really think his biggest strength, especially at that stretch forward, is going to be that ability to put a lot of pressure on you off the dribble,” Kennedy said.

Fresh out of school

Freshmen Nate Morris and Breein Tyree are “just trying to get acclimated to what we’re doing” as Ole Miss’ lone high school signees, Kennedy said. Tyree, a 6-2 guard from New Jersey, will compete to be in the backcourt rotation while the 6-9 Morris could find his way on to the court early as a rim protector.

Morris, who could play power forward or center, is already doing what he can to get his body ready for the rigors of the college game, packing on approximately 15 pounds since arriving on campus at the beginning of the month to push his weight to nearly 230 pounds.

Two more bigs will arrive next month in Karlis Silins and Dominik Olejniczak. Silins, another stretch forward at 6-10, is playing for the Latvian under-18 national team while Olejniczak, a 7-foot transfer from Drake, is competing for the Polish national team in the U20 European Championships in Greece. Olejniczak will have to sit out this season per NCAA transfer rules and will have three years of eligibility left beginning with the 2017-18 season.

It may be difficult for all of the Rebels’ newest big men who are eligible for the upcoming season to carve out playing time with senior Sebastian Saiz and junior Marcanvis Hymon back to log most of the frontcourt minutes, but Kennedy said every newcomer will get the chance to show he’s ready before any decisions are made about redshirts.

“We’re expecting Deandre Burnett to step in to a role of leadership from Day 1,” Kennedy said. “Cullen, we’re expecting to come in and step into a leadership role from Day 1. The rest of those guys, they’re all new to this. How quickly they pick up the transition will determine how much they contribute.”