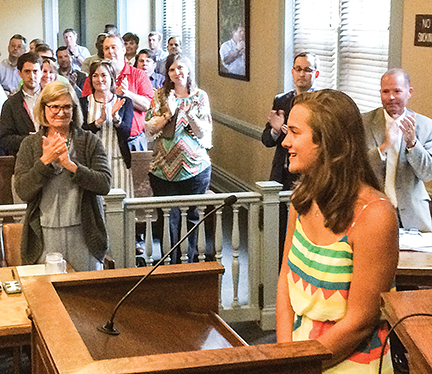 When Laurel Tollison was first hired by the Oxford Park Commission to be a lifeguard at the City Pool this summer, her fellow lifeguards told her not to expect anything major to happen during her first summer.

“They all told me they had never actually had to save anyone from drowning,” Tollison said Thursday.

At 17 years old, Tollison has done just what she was trained to do — save a life.

On June 29, Tollison was sitting on her stand at the pool when she noticed a boy floating on his stomach. After a moment of watching him, she realized he wasn’t swimming.

“I blew my whistle three times, as we’re suppose to do, and jumped into the pool,” she said. “I flipped him over and his eye were open but he was unconscious.”

After getting the 4-year-old boy out of the pool with the help of other lifeguards, Tollison started CPP, while someone else called 911.

“I did four rounds of CPR and then a nurse practitioner took over,” she said. “Then EMS arrived. He barely had a pulse but it was starting to get stronger.”

Eventually, the child came to and coughed up the water in his chest, along with some food he ate before jumping into the pool.

“He put food in his mouth before getting into the water, which you’re not suppose to do,” Tollison said.

Tollison has since learned the boy pulled through his near drowning and is doing well.

For her quick thinking and courage, Tollison was given a commendation from Mayor Pat Patterson and the Oxford Board of Aldermen on July 19.

“We are very proud of you,” Patterson said. “We know with youths like you, our future looks bright.”

This was Tollison’s first year being a lifeguard; however she’s no stranger to swimming. She has been on the Oxford High School swim team since seventh grade. Despite her harrowing experience, she said she still wants to be a lifeguard.

“I always thought I’d panic if something like this happened, but I knew I had to save this little boy’s life,” she said. “I had to give him CPR or he would die. There was no time to panic. I just jumped into emergency mode.”

Tollison admitted that as soon as the child was taken away in the ambulance, the adrenaline left her body and she was suddenly exhausted.

“I went home and just shut down for a couple of hours,” she said. “It really made me aware of how this can happen to anyone.”

Tollison is the daughter of Sen. Gray Tollison and Farish Percy and will be starting her senior year at OHS in August.