Courthouse has always been ‘the hub and focus’ 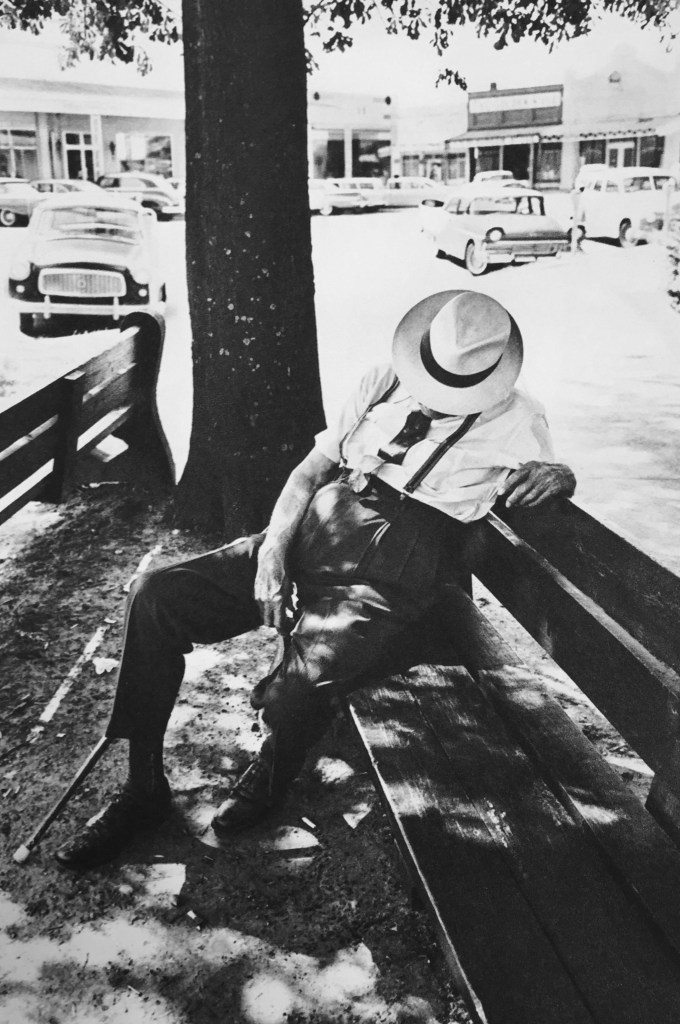 In many of Faulkner’s novels, the Yoknapatawpha County Courthouse was considered the center of all things. There were many uses of the grounds and building by all the citizens. In photographer Martin J. Dain’s 1963 book entitled “Faulkner’s County: Yoknapatawpha,” — published in 1963 just one year after Faulkner’s death in 1962 —  there are many great old photographs, taken in the 1950s, of the “hub and focus” and the town Square.

He writes in the explanatory notes section at the end of the book “on Saturdays, county and town folk gather about the Square. It is the shopping and general meeting day. Many just watch and wait. There are no marked boundaries, but tradition has established that Negroes gather at specific parts of the Square.”

Dain goes on to state, “Summer and winter, men sit in the cool (or warm) hall of the Courthouse and watch and wait and talk. This is great storytelling country.”

In the green space around the Courthouse, Dain takes a quote from “Absalom, Absalom!” to describe the old men who were seen everywhere around the Courthouse. Faulkner wrote, “Beneath the porticoes of the courthouse and on the benches about the green, the city fathers sat and talked and drowsed, in uniform too, here and there.” This was at the time in Jefferson after the Civil War.

Political speeches, “Welcome Rebel” parties in the fall when the students returned to the university, truck farmer’s, mule traders, and even itinerant preachers were known to use the area next to the Courthouse. At one time, on the green, local men would get up a domino or checkers game on concrete tables placed around the building. Also on the north side of the Square, truck farmers arranged their trucks in the parking spaces to sell their produce.

What was so interesting was that you could find just about any type of produce that could be grown in this part of the South. You could purchase the produce by the bag or the bushel. On Saturdays, the population of Oxford would increase about two fold with the county residents coming into the county seat to conduct their business and replenish their stock of staples foods and produce they didn’t grow themselves.

When I was a child my grandfather, John Robert Mayfield, would make his way from his home on South Lamar just about every day of the week and on Saturdays, to the Square to meet with his old friends. If the weather was good they would sit on the benches situated around the Square.

If the weather was bad, they would sit inside in the hallway of the Courthouse. Along the east wall, there were long benches, like church pews. Behind the men sitting in the pews was a sign painted on the wall stating that there was a $5 fine for spitting on the floor.

When you opened the door to the Courthouse — on a day when the old men were sitting inside — the smell of smoke, chewing tobacco, and disinfectant would hit you square in the face. There were three spittoons near the benches where the men sat, but you know as well as I do the tobacco chewers and snuff dippers didn’t always hit their target.

The smell of disinfectant came up from the public restrooms in the basement of the Courthouse and from use on the wooden floors in the building. To keep down the dust, the floors would be liberally covered with some sort of oily substance, such as linseed oil or “dust down.” These chemicals would add to the smells you would encounter in the building.

At this time in the history of Oxford and Lafayette County, the Courthouse housed several offices. On the southwest corner was the sheriff’s office. The sheriff was also the tax collector and each October every citizen of the county who owned a car or a truck had to purchase a car tag for the upcoming year. You were given a new tag at the time, not just a renewal sticker to place on the tag. You can imagine how hectic it was for everyone in the county to stand in long lines to purchase a tag once a year in October.

In the corner of the sheriff’s office, a Justice of the Peace would hold court. The justice handled the judicial business from a desk and a chair in this corner of the office. This was where everyone accused of drunkenness, gambling, disturbing the peace, bootlegging, or other offenses would begin to answer to “the law.”

As it is today, the Square has always been a gathering place for the people who live in Oxford and Lafayette County and for those who attend the University of Mississippi.