Ole Miss football has experience up front despite losses 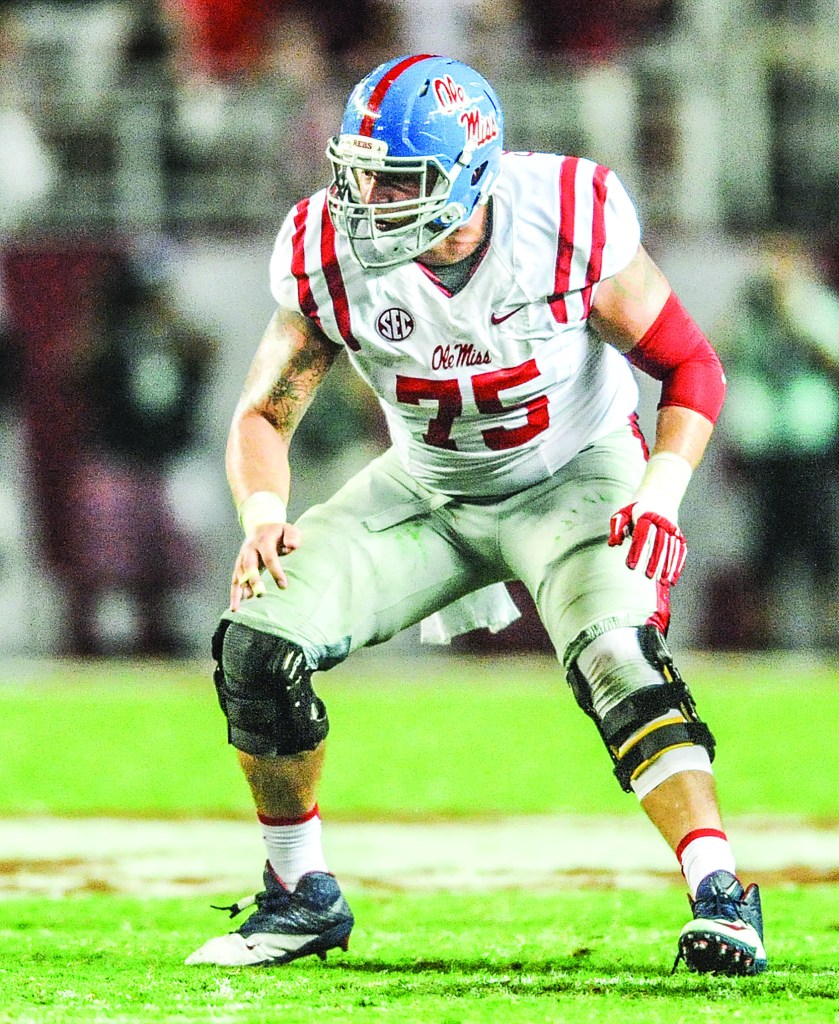 Senior Robert Conyers (75) is coming back from another knee injury to anchor an Ole Miss offensive line that’s got some experienced players back after losing five seniors. (Bruce Newman)

EDITOR’S NOTE: This is the fifth in a 10-part series breaking down each position on Ole Miss’ football team entering fall camp. A different position will be featured each day leading up to the Rebels’ first day of practice on Aug. 8.

Every offensive lineman that started the Sugar Bowl for Ole Miss is no longer on the roster.

But even with four seniors and Laremy Tunsil gone, that doesn’t necessarily mean the Rebels are green up front.

Whether it was because of suspensions, injuries or sheer talent level, Ole Miss rotated double-digit players along the line last season and has five linemen back who were a part of it. Center Robert Conyers, right tackle Sean Rawlings and left guard Javon Patterson, who all enter fall camp as starters, played in at least six games a season ago as did right guard Jordan Sims, another projected starter, and fellow guard Rod Taylor.

Health is something to watch for up front as the group has been bit hard by the injury bug in recent seasons. Conyers is coming off a torn ACL, the third knee surgery of his career, while Taylor is getting back to full strength after dealing with a torn labrum last season.

With a healthy Taylor back in the fold, Ole Miss should feel good about the guard spots with the experienced gained last season by Patterson, a preseason third-team All-SEC selection, and the 6-foot-4, 330-pound Sims, who continues his transformation after arriving on campus two years ago north of 360 pounds. Ole Miss is also counting on game experience to benefit Rawlings, who started seven games as a redshirt freshman after Tunsil’s early season suspension forced him into action.

Finding Tunsil’s replacement is the most pressing issue for the Rebels.

After not having to worry about left tackle for the better part of three seasons, Ole Miss is looking at a former quarterback and tight end, a pair of freshmen and a senior reserve as their options to step in for the first-round draft pick. Senior Jeremy Liggins is listed at the top of the preseason depth chart at the position, but he’ll have competition from Talbot Buys and redshirt freshman Alex Givens.

Then there’s true freshman Greg Little, who, like Tunsil three years ago, signed with Ole Miss as the nation’s consensus No. 1 high school offensive tackle. With no proven commodities in front of the talented Texan at the position, the 6-5, 315-pound Little could make a serious push for playing time and replace Tunsil sooner rather than later.

“Greg Little is a very talented offensive lineman,” Freeze said. “Haven’t seen how that translates into all of the looks he’s going to see yet.”

Jacob Feeley, Daronte Bouldin and redshirt freshman Michael Howard are the backups at center, right guard and right tackle, respectively, and could be a part of the rotation this fall. Tyler Putman is coming off a redshirt year and gives the Rebels some depth.

Another true freshman, former Lafayette standout Eli Johnson, went through spring practice and could push Feeley to be next in line at center. Four other signees will join the mix up front this fall in guards Chandler Tuitt and Jack DeFoor and tackles Bryce Mathews and Royce Newman.