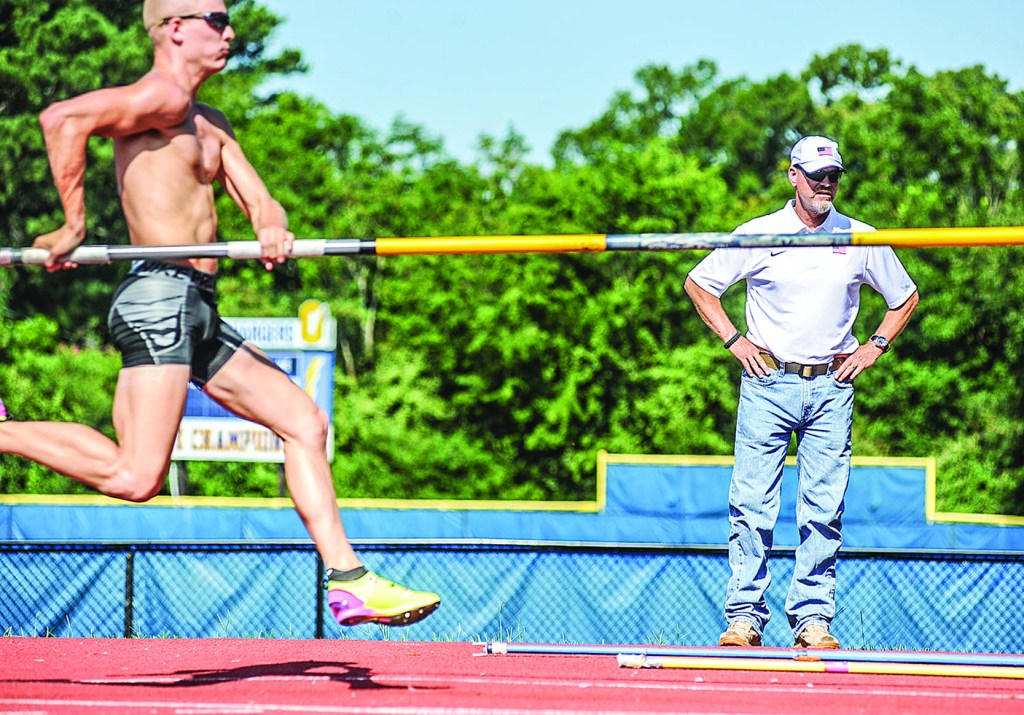 Sam Kendricks, a former Ole Miss and Oxford High athlete, practices for this year’s Summer Olympics at Bobby Holcomb Field in Oxford on Monday as his father and coach, Scott Kendricks, looks on. Sam leaves for Rio de Janeiro on Sunday. (Bruce Newman)

On July 4, Sam Kendricks celebrated America’s birthday by qualifying for the U.S. Olympic Track & Field team in Eugene, Oregon. With the pole vault event not beginning in Rio de Janeiro until Aug. 13, he had plenty of time to kill.

Though a professional vaulter does not waste time. After a taking a month off to prepare for the U.S. Trials, the Oxford native did not want to have another month of rest and immediately went overseas to compete in three events over a 10-day period — two events in Germany and one in London.

As has been par for the course for Kendricks when it comes to international competitions, he took first place at each event in Rottach-Egern and Jockgrim, Germany while placing second at the Diamond event in London. The second-place finish was due to his legs not being 100 percent because of the first two events.

“Once we reached that level (of competition at the trials), we wanted to stay at that plateau,” Kendricks said. “So we needed to pick some competitions that were not going to take us out of our comfort zone and allow us to compete at a high level.”

Keeping his competitive edge in check with three events, Kendricks returned home for a couple weeks to rest and practice at a familiar place. He has been getting his Olympic preparations in at his old stomping grounds at Bobby Holcomb Field, where Kendricks began his pole vaulting career and winning state championships for the Chargers.

Getting the opportunity to practice at a place that is comfortable to him whenever he wants to is something few athletes at his level are afforded.

“Having that freedom of selection is something every athlete doesn’t get,” Kendricks said. “A lot of athletes have a place to train, but they don’t have access to his whenever they want. So I can train when I’m at my best strength during the day and for me it’s during the morning. … Coming back to Oxford and being able to go to Ole Miss and have all my physical therapy be in Oxford and the abilty to sleep in my own bed for a week and a half is very valuable. It’s worth its weight in gold.”