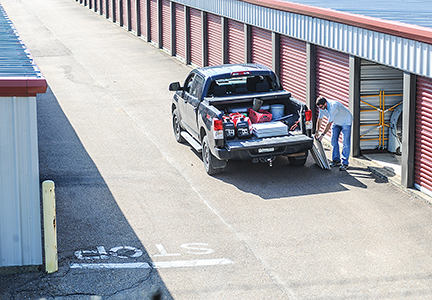 Bruce Newman Brandon Warren moves items from a storage unit in Oxford this morning. Storage units are in high demand currently and in short supply due to students moving out temporarily.

While housing is at a premium with Ole Miss students coming back into Oxford for the fall semester, it appears storage units are in just as high demand and nearly as scarce due mainly in part to students needing a temporary place to store their stuff.

Floyd Hubble, owner of Your Extra Closet, explained that for a two-week window, several of the apartment complexes in Oxford require students to move out when their lease expires in order to do maintenance on the units.

“It causes a huge problem,” Hubble said. “For about ten days out of the year, it’s very difficult to find a unit available. During that period, we’re slammed, but for the next nine months, there’s an excess of inventory and an over supply of inventory.”

Hubble, who has been in the storage unit business in Oxford for 12 years and has six locations in the area, said he’s seen it year after year.

“It’s like a restaurant on the Square during a football game,” Hubble said. “You may not be able to get a table for that day, but for the rest of the week you shouldn’t have a problem.”

Hubble said many of these customers only occupy a unit for just those two weeks.

“There are no long-term contacts,” Hubble said.

Hubble said Your Extra Closet just opened a climate control building and will add a small amount of units each year.

My Oxford Storage has 600 storage units located at three different facilities in Oxford and manager Janel Arntson said Tuesday all 600 are currently full.

“We fill up by the end of April,” she said. “This is how it goes, though. Students who leave during the summer have to store their things somewhere. But if they wait until now, they won’t find a thing. I’ve had calls in February.”

The demand for more storage, while largely due to students coming and going, could also be an indicator of more people moving into the area.

“We’ve had a lot of people just moving to the area and looking for a place, or they get a smaller space and have to store some of their things,” Arntson said.

To help ease the strain on the lack of units, My Oxford Storage is in the planning process of building another three structures off North Lamar Boulevard, that when finished, will have another 600 units.

“We’re going to do it in phases, though,” Arntson said. “One building at a time.”

“One day I counted 45 phone calls looking for storage,” she said. “Some have had to go as far as Memphis to find something.”