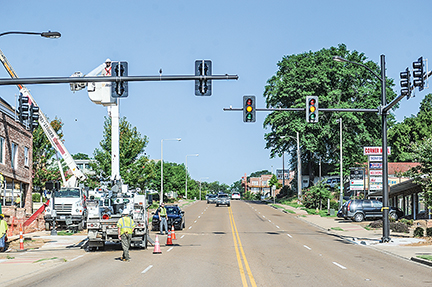 The traffic signal at University Avenue and South 16th, in Oxford, Miss. on Wednesday, August 3, 2016, is set to began flashing today and will become fully operational in a week.

A new traffic signal at South 16th Street and University Avenue will go live today, according to city officials.

The lights were installed several weeks ago and have been hanging dark over the intersection.

But today, the light will be activated in flash mode for a week.

During the period, the signal will not be used to manage traffic but will flash yellow on University Avenue and red on South 16th Street.

“We will have a week where the light simply blinks to give people a chance to get used to the change before it actually starts controlling traffic,” said Assistant City Engineer Reanna Mayoral.

The light will be placed in full color operation — red, yellow, green — around Aug. 10.

While the signal is in flash mode, motorists on university facing the yellow flashing lights do not have to stop but should proceed with caution. Motorists on South 16th must stop and yield to other drivers while the light is flashing red.

Once the signal is fully activated, there will also be pedestrian crossing signals at the intersection.

Until that time, pedestrians should continue to use the crosswalks at South Lamar or South 18th to cross the road.

“Please use caution through this area as motorists adjust to the new traffic control pattern,” Mayoral said.

Developer Pat Chisholm, who has two multi-unit residential developments on South 16th Street, is paying to put in the light. The first one, 607 South is 12 townhouses just off University Avenue on S. 16th. Village Walk is under construction where the Oxford-University Bank used to be before moving into a new building further west on University Avenue. The development will include commercial space that will front University Avenue and 30, one and two-bedroom units, geared toward students.

When Chisholm presented the plans for Village Walk before the Oxford Parking Commission last year, a traffic study showed that a traffic signal there “could improve the level of service” at the intersection. With more people living on South 16th Street, making the left-hand turn onto University Avenue is becoming more difficult.