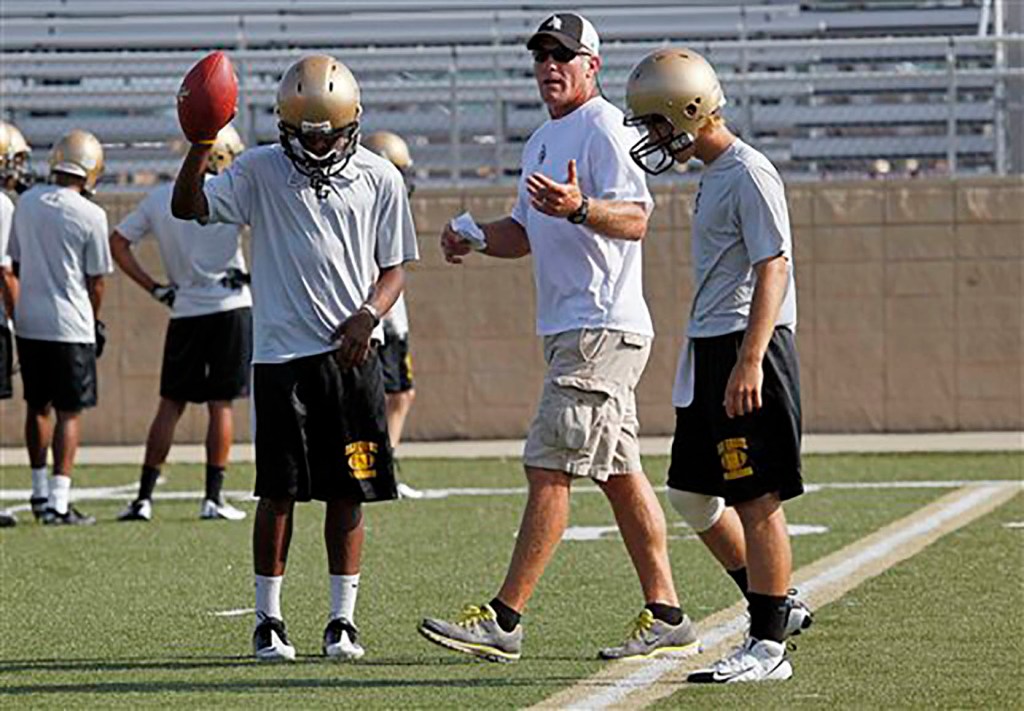 We knew No. 4 before he became a three-time NFL MVP, before he was an 11-time Pro Bowler, before he played through injuries that would have required hospital care for normal humans, and before he was generally recognized as the toughest hombre in sports.

We knew The Gunslinger before he made a difficult recovery from painkiller addiction, before he came out of retirement twice, before the rest of the country marveled at a grandfather playing with the zeal of a kid in his backyard, and before he was appropriately selected for Saturday’s induction into the Pro Football Hall of Fame.

I’ll be honest: I had no idea Brett Lorenzo Favre would accomplish any – much less, all – of this when I first saw him play as a 17-year-old, virtually un-recruited freshman at Southern Miss.
But on that first Saturday afternoon, nearly 29 years ago, I did know this much: Favre was different, and he was special.

The rest of the football nation this week celebrates Favre’s professional career and that’s as it should be. Here, we also remember Favre from back when nobody outside Mississippi knew how to spell, much less pronounce, his name. So here are my five favorite Favre pre-NFL moments, beginning with that first game at The Rock when USM trailed Tulane in the third quarter and Golden Eagle fans were booing a lackluster offensive performance.

• Sept. 19, 1987: USM had been blasted by Alabama in its opener and was in big trouble against Tulane. Enter Favre, 17 years old and hung-over from a late night of beer drinking (he didn’t expect to play). The plan had been to red-shirt Favre. The plan was scuttled. On his first play from scrimmage, Favre took a short drop and fired a rocket to wide receiver Chris McGee. McGee really had no choice but to catch it. The ball just sort of embedded in his gut.

Favre went on to throw two touchdowns, including the game-winner to McGee in a 31-24 victory. Not bad for a hung-over 17-year old.

The Golden Eagles trailed East Carolina 42-38 with seconds remaining. Driving against the clock, Favre scrambled around to his left, then spotted Alfred Williams open 40 yards down and all the way across the field. Favre unleashed a 45-yard fastball. Williams turned around just in time to catch it inside the East Carolina 10. USM then scored the winning touchdown and Williams was asked afterward how he knew to turn around. “I heard it,” Williams said.

“You usually can hear Brett’s passes coming. They whistle.” OK, then.

• Sept. 2, 1989: Favre and the Eagles were huge underdogs on the road in Jacksonville, Fla., against Bobby Bowden’s sixth-ranked Florida State Seminoles. Again, USM was driving in the final seconds, trailing 26-24. Facing third and goal, offensive coordinator Jeff Bower convinced head coach Curley Hallman to call a play-action pass instead of a safer running play. FSU, expecting a run, sold out. Favre completed the game-winner. Said Bower, “I wouldn’t have called that play with any other quarterback.”

• Oct. 14, 1989: Going against the Louisville Cardinals at Louisville, Favre faced another last-minute situation. Nine seconds remained. The score was tied at 10. USM had the ball at its own 20 after Louisville missed a field goal. Favre scrambled out of the pocket to his right, stiff-armed 330-pound Ted Washington, a future NFL All-Pro, to the ground. Then, from his own 12-yard line and on the run, Favre launched a missile. Wide receiver Darryl Tillman caught it at the Louisville 18 and pranced into the end zone. The ball traveled 70 yards. Tillman caught it in stride. Final: USM, 16-10.

• Sept. 8, 1990: John Wayne, move over. Favre entered his senior season, looking frail and gaunt, the result of an automobile accident that almost killed him. To save his life, surgeons removed 30 inches of his intestines. Six weeks later, Favre was 30 pounds under his normal playing weight. Facing Alabama at Birmingham’s Legion Field, he somehow willed USM to a stunning 27-24 victory.

So, yes, we saw Favre before anyone else: the huge arm, the grit, the fearlessness, the flair for the dramatic and his pure joy at playing the game. We were blessed.

Rick Cleveland is a syndicated columnist and historian at the Mississippi Sports Hall of Fame and Museum. His email address is rcleveland@msfame.com.