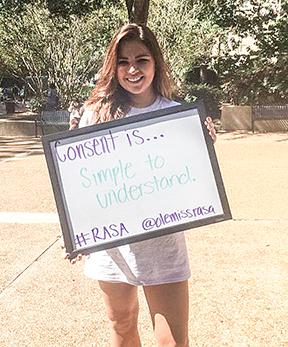 University of Mississippi UM student Elizabeth Romary is one of 28 students from across the nation chosen for a national advisory committee to prevent sexual violence.

A University of Mississippi student has been selected to serve with a national organization that works to prevent campus sexual violence.

Elizabeth Romary, of Greenville, North Carolina, is among 28 students chosen for the It’s On Us Student Advisory Committee. Launched by the White House, the program is a grassroots, student-led approach to combatting sexual violence. Romary will help organize students to encourage bystander intervention and support survivors.

“The Student Advisory Committee will work to build student leaders on campuses across the country,” said Romary, a senior majoring in international studies and Spanish. “I am in the Southern region, which includes Texas, Oklahoma, Louisiana, Arkansas, Mississippi, Alabama, Tennessee and Kentucky.

“We will be reaching out to campus leaders at schools in those states to organize events, collaborations with other campuses and to provide help with starting student organizations on those campuses.”

A member of both the Croft Institute for International Studies and the Sally McDonnell Barksdale Honors College, Romary is a founding member of Rebels Against Sexual Assault and was the group’s president for fall 2015. She is expected to represent Ole Miss well, said Lindsey Bartlett-Mosvick, project coordinator in the UM Counseling Center and RASA adviser.

“Elizabeth dedicates her time to eradicating sexual violence on our campus as one of our first peer educators and our first president of Rebels Against Sexual Assault,” she said. “I know she will inspire more students across the country to become active bystanders, to prevent sexual violence and to create a supportive environment for survivors of sexual violence.”

“The University of Mississippi does not tolerate sexual violence,” Hephner LaBanc said. “And with Elizabeth Romary’s assistance, staff and students have more effectively collaborated to provide programs and services to educate all members of our campus community about responsible conduct, the meaning of consent, how to report incidents of sexual misconduct and how to hold individuals accountable for their behavior.”

Romary passed along her duties as RASA president while studying abroad during the spring semester.

“My responsibilities were communicating with other student organizations, helping to organize our peer education trainings and running our meetings,” Romary said. “I chose to become involved because I was surprised that a student organization combating the issue of sexual assault on campus didn’t already exist.

“This issue is extremely important to me and I wanted to be able to create a community for survivors, bystanders and other individuals who care about this issue. We also wanted to find a way to make known the resources on campus available to students.”

Nationally, 1 in 5 women and 1 in 16 men are sexually assaulted while in college. It’s On Us is a campaign to change the culture around sexual assault.

The organization’s framing principles are increasing bystander intervention, defining consent and creating an environment to support survivors. This campaign focuses on educating, engaging and empowering students and communities to be part of the solution to end sexual assault.