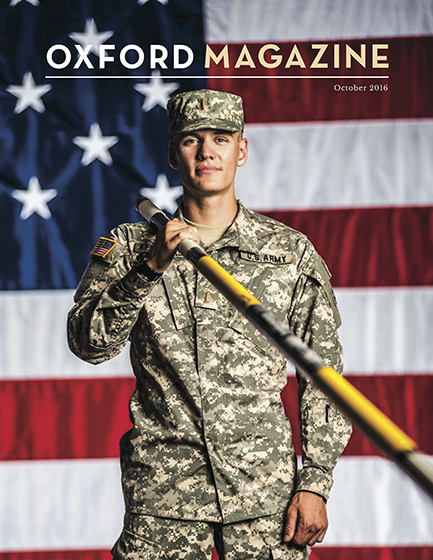 This is a mock up cover for Oxford Magazine featuring Sam Kendricks of Oxford who will go for gold in the Olympics next week. (photo by Bruce Newman)

A new monthly magazine is being launched to celebrate the center of the Southern universe — Oxford, Mississippi.

Oxford Magazine will be a content-driven glossy that celebrates city’s richness in writing, food, and culture.

The monthly magazine will be paid-subscription product that mailed to homes and businesses throughout the region. It will launch this fall as a must-read companion for everyone who enjoys the good life in Oxford, literally or spiritually.

“Oxford is the South’s smartest, most colorful city and it longs for a content-driven magazine that exemplifies its culture in compelling depth,” said David Magee, publisher of the new magazine. “This is the magazine for people who love Oxford, both those who live here full or part-time, and those who don’t but wish they could.”

Many of the city’s most talented writers will be featured, along with the work of noted Oxford photographer Bruce Newman, who has been photographing the city and Ole Miss for almost 30 years.

“Bruce has a unique eye for Oxford and its culture,” Magee said. “We are fortunate to have such an icon be a part of this.”

The newsstand price for Oxford Magazine will be $5. Annual subscriptions for all 12 issues delivered through the mail are $40.

The first 300 subscribers get the magazine for half-price ($20) for the first year, however. To get one of these early discounted subscriptions, simply email subscriptions@oxfordmag.com.

Alex McDaniel, recently hired editor of The Oxford EAGLE, will serve as editor of Oxford Magazine. She is a former managing editor of Birmingham magazine.

Hegwood is a native of Jackson and graduate of Ole Miss. He previously worked at The Daily Mississippian and interned at Farmhouse Marketing in Memphis. As associate publisher, he will oversee creative and many business aspects of the magazine.

“Connor knows Oxford, Ole Miss and he is a native Mississippian,” Magee said. “He will work closely with me to create and deliver a product that we hope becomes a must-have for everyone intrigued by this remarkable place.”