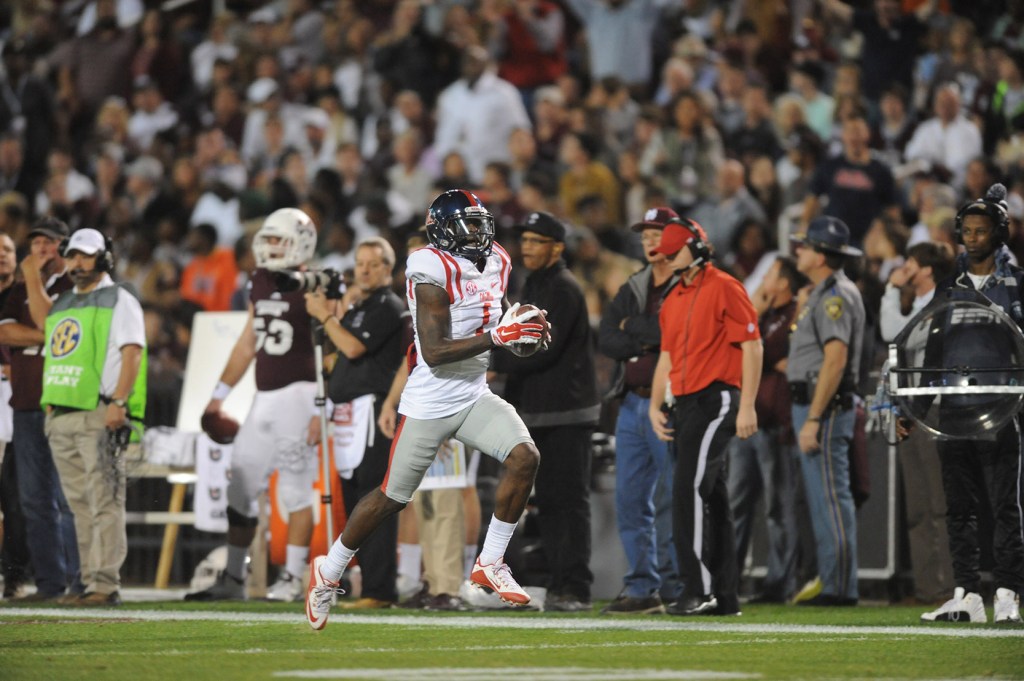 Ole Miss’ Tony Bridges returns an interception for a touchdown against Mississippi State on Nov. 27, 2015, at Davis Wade Stadium in Starkville. Bridges is one of two starting cornerbacks returning for the Rebels this fall after quickly breaking into the lineup a season ago. (Bruce Newman)

EDITOR’S NOTE: This is the eighth in a 10-part series breaking down each position on Ole Miss’ football team entering fall camp. A different position will be featured each day leading up to the Rebels’ first day of practice on Aug. 8.

The roster turnover that comes with each passing season leaves Ole Miss with a degree of uncertainty and instability at some positions entering fall camp.

Cornerback isn’t one of them.

Senior Tony Bridges and junior Kendarius Webster are back to draw the opposition’s best receivers this fall after starting all but two games together a season ago. Webster was a steady presence after rising to the top of the depth chart after his freshman season to start every game last season while Bridges made a smooth transition from junior college to eventually settle in as Webster’s sidekick.

A full year of starting experience should help the duo kick their game up a notch and improve on what they did last year. Both physical corners, the 5-foot-11, 198-pound Webster was the Rebels’ seventh-leading tackler a season ago and had 11 pass breakups while the rangy Bridges, at 6-1 and 185 pounds, had 36 tackles and three interceptions, second-most on the team.

Who Ole Miss’ third corner will be isn’t as clear, though there’s no shortage of candidates with varying levels of experience.

Senior Carlos Davis returns to back up Webster, according to the Rebels’ preseason depth chart, after missing all of last season with a knee injury. Perhaps the fastest player on the team, Davis could also help when the Rebels go to their nickel and dime packages.

Another senior, Kailo Moore, will also see time when Ole Miss puts extra defensive backs on the field, though he’ll start camp on the third team. Redshirt freshman Jalen Julius, another burner, is ahead of Moore on the preseason depth chart as Bridges’ primary backup.

Cam Ordway saw action in seven games last season as a true freshman and should get more comfortable with the Rebels’ scheme as he goes through his second season. Joining the fold in camp will be true freshman Jaylon Jones, a four-star prospect and high school teammate of fellow signee Greg Little who will compete to be a part of the rotation.