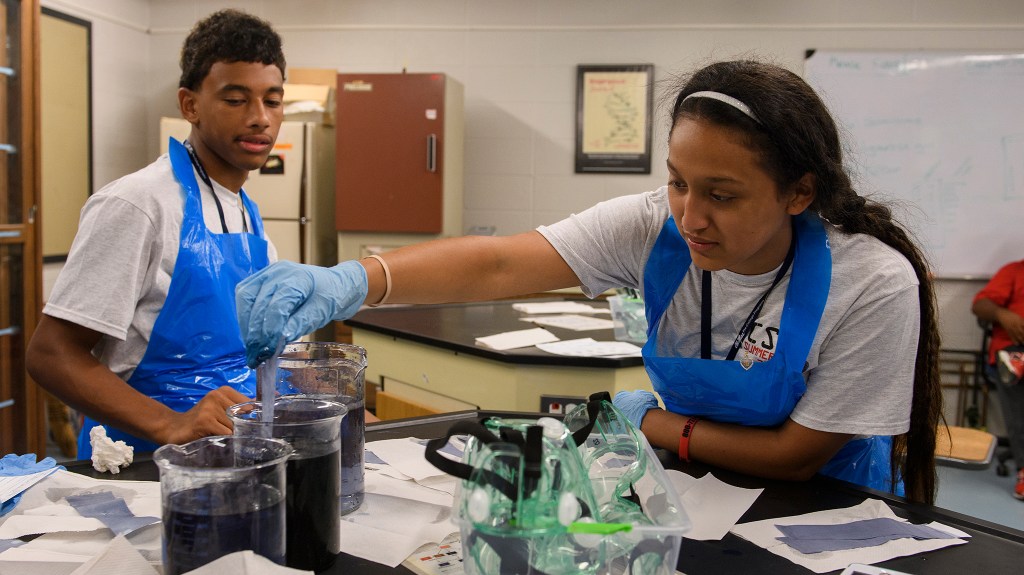 Thirty-eight seventh-through 12th-graders visited Ole Miss as part of a weeklong camp on forensic science. Sponsored by the American Academy of Forensic Science, and the UM Department of Chemistry and Biochemistry and Division of Outreach, the event drew students from Mississippi, Alabama, California, Illinois, Louisiana, Missouri, New Mexico, Ohio and Tennessee.

“The CSI Camp gives hands-on experiences to students who love puzzles, science and watching forensic science television shows,” Godfrey said. “During the week, students learned the importance of the correct chain of custody procedures when handling evidence that they collect at the crime scene. Students must analyze the evidence using presumptive and confirmatory tests.”

Participants observed as Godfrey and others demonstrated the proper procedures for analysis of the staged evidence recovered from the mock crime scene.

A mock trial in the School of Law’s moot court room on the last day of the camp tests the students’ knowledge on the various topics and labs.

“The students must serve as expert witnesses, prosecutors, defense attorneys, suspect and so forth,” Godfrey said. “The expert witnesses must defend their analysis of the different pieces of evidence found at the crime scene. A jury will then render a final decision in the case.”

Divided into smaller groups, the students rotated daily between labs in the Thad Cochran Research Center and stations for DNA collection, presumptive tests, ballistics and gunshot residue, fingerprints, and analytical chemistry and forensics. At each specific station, students analyzed their samples and collected data.

A tour of campus and the UM medicinal plant gardens was scheduled on Wednesday by Don Stanford, assistant director of UM’s Research Institute of  Pharmaceutical Sciences.

This forensics summer camp was the second held at the university.

“Our first CSI Camp was held last summer, and we had 30 campers representing 15 states,” Godfrey said. “Our goal is always to encourage these gifted young minds to become STEM (science, technology, engineering and mathematics) majors once they enter college.”

“I really like looking at the crime scene, collecting evidence and figuring out how the crime happened,” said Kira Brown, a rising ninth-grader from Falkville, Alabama.

“It was remarkable,” said Aragon, from Albuquerque, New Mexico. “The camp helped me learn everything about CSI and the importance of taking good notes.”

“It’s definitely more than using goggles and gloves,” said another eighth-grade student. “I learned that while shows like ‘CSI’ show only one barrier around a crime scene, there are actually two barriers. I also discovered it actually takes much longer to process evidence and solve a case in real life than it does on television.”

By allowing the students to visit the department and experiment with the equipment, UM faculty said they hope to pique their interests in forensic chemistry and possibly recruit them one day to the university.