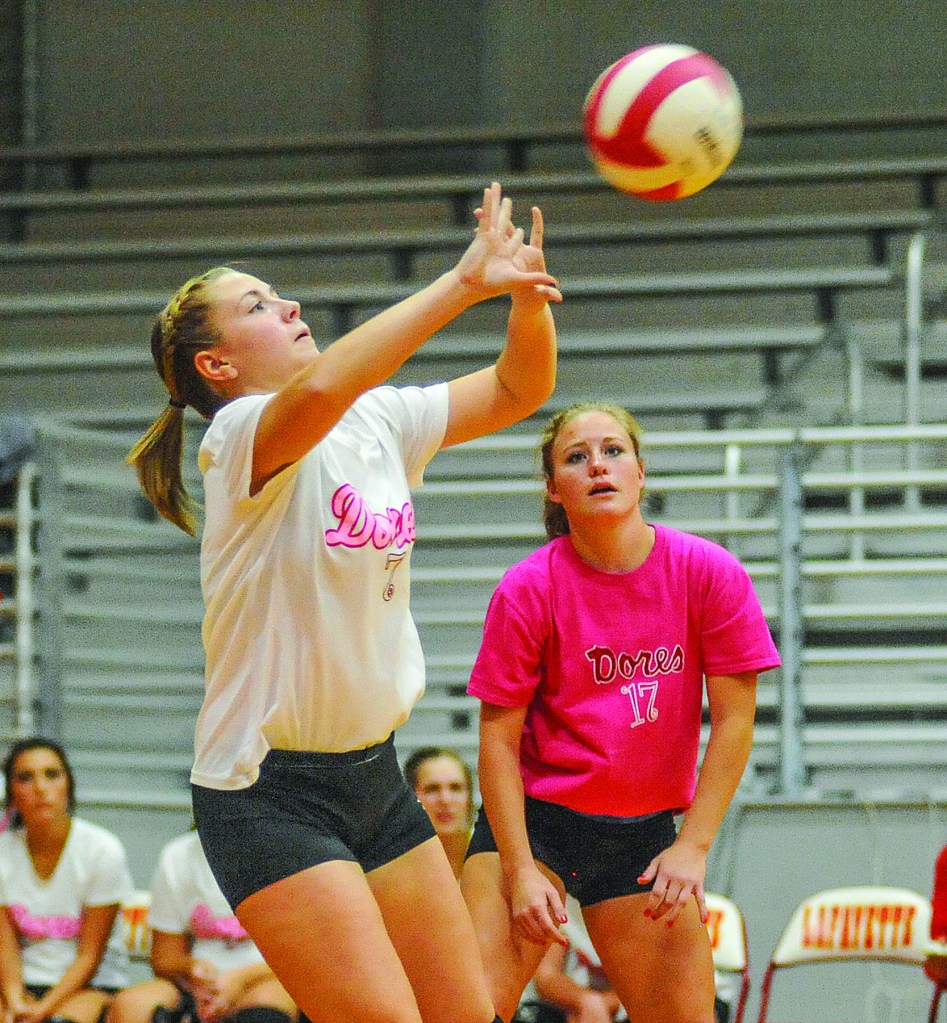 Seniors Cara-Anne Sallis (7) and Kirkland Pruitt (17) are still around to help anchor Lafayette this season with some key pieces gone off last year’s roster. The Commodores begin the season Tuesday against crosstown foe Oxford. (Bruce Newman)

It’s weird for Clint Jordan to watch his team practice and not see Emily Robinson on the court, but Lafayette’s third-year volleyball coach isn’t exactly fretting about where the leadership will come from for his Commodores this season.

Robinson was a mainstay in Lafayette’s starting lineup the last handful of years and was a two-time EAGLE Player of the Year, but she’s gone now. Yet Jordan has three senior starters back — Orianna Shaw, Kirkland Pruitt and Cara-Anne Sallis — who he’s counting on to pick up where Robinson left off.

“They may not carry the load in numbers, but they’re absolutely a great trio of leaders,” Jordan said. “They each have different strengths. Orianna’s is her work ethic. Kirkland’s is her smile and her ability to kind of challenge you without being negative. Cara-Anne is just so smart and she always has some advice that kind of motivates you or moves you to be a better player. It’s nice having the three of them kind of in unison as their own little team within our team.”

Shaw played in the Mississippi Association of Coaches All-Star Game this summer and, at 5-foot-10, gives Lafayette a lengthy presence as a middle blocker. Pruitt will serve as the libero and is the Commodores’ top returning passer from a season ago while Jordan called Sallis the “heart and soul of this team” at outside hitter.

Lafayette also lost Kylie Glass and Shelbi Buford to graduation, meaning juniors Savannah Baker and Cylie Robertson will see their roles increase after getting limited action a season ago. Taking over for Robinson at setter will be freshman Julianna Ingram, whose development, Jordan said, will play a large part in what kind of season the Commodores have after advancing to the MHSAA Class II playoffs last season.

“She’s got to get better quick,” Jordan said on Ingram. “She’s doing a really good job. She’s not going to be Emily, and I don’t need her to be Emily because we don’t need to play that way.”

Switching it up
With some players taking on new roles with various skill levels, Lafayette will shift away from the aggressive pace it has played at in recent years to a more deliberate attack this season. Defense, Jordan said, may be the Commodores’ best offense.

“To be honest with you, we’ll take a lot less aggressive swings and just try to win through attrition,” Jordan said. “If they’re going to make mistakes, we’re going to allow that to happen. We’re just going to basically keep the ball alive and keep the volley going until you make a mistake or we find an opening.”

That doesn’t mean Jordan expects this year to be a lost season.

Lafayette won the Region 4-4A/5A championship last season before being ousted in the second round of the playoffs by two-time defending state champ Lewisburg. Catching up with Lewisburg may be a stretch, but Jordan believes his squad still has enough talent to be in the postseason mix once again.

The Commodores will get the season started Tuesday with a crosstown trip to take on Oxford.

“Realistically, I feel like we can compete for a division title and make a run at winning a few playoff games,” Jordan said. “Now we know what we have, and we know Lewisburg didn’t graduate a soul and won a championship. For us to have a chance against Lewisburg, we have to play our absolute best and they would have to have an off night, a very off night.”