Thousands turn out for Watermelon Carnival 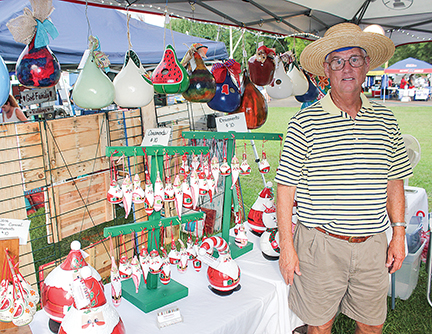 Allen Brewer Addy Jones sells his painted seasonal gourd bird houses at his booth at the Watermelon Carnival in Water Valley on Friday. The annual event wrapped up Saturday.

Local residents and visitors from all over came out to celebrate the 47th annual Watermelon Carnival this weekend. Despite the hot and rainy weather, the carnival went off without a hitch.

Water Valley is famous for the weekend festival that hosts a number of vendors and food trucks. The carnival also holds a street dancing competition, fireworks, an antique car show and plenty of live music.

“It quadruples the population of Water Valley,” said Water Valley Alderman Larry Bell. “It’s known around the country — we have people from Florida and Texas who come. It’s short lived, but as far as bringing people to Water Valley, it mounts up.”

Craft vendors, selling everything from bird houses to hand-made jewelry, came in droves to the carnival. While some vendors were local, others came from as far way as Arizona.

Watermelon farmers were present to sell trailers full of their ripe melons. More than three different groups sold melons at the carnival, all locally grown.

“You see a lot of familiar faces each year and some new faces too,” H&H farms watermelon seller Diane Hudson said. “I can’t remember the first year we started selling them.”

The carnival brings back many former residents from out of town. Several class reunions are held during the carnival for old friends to reunite.

The Water Valley Queen and the other pageant winners are honored during the first night of the carnival. The winners were chosen last March in categories of age. Junior Auxiliary hosts the pageants and the winners are selected by the community.

“It’s the happiest time of my life,” said grill cook Willie Foxx, known by most as Butch. “I remember when few people came, and now lots of people come.”

While some vendors like Foxx have come to the carnival for many years, others have just started to appear.

“It’s a fun job,” retired-teacher-turned-lemonade-vendor Pam Daves said. “I like watching the children get excited about all the treats and the live music.”

Food is a big deal at the festival as there are multiple food trucks selling funnel cakes, hot dogs, and other favored fried foods. Dan Rast sold fresh pork skin with his award-winning barbecue sauce at his booth. Oxford’s own Rocky Mountain Chocolate Factory also had a booth selling chocolate-coated apples.

“We have a lot of customers here,” said Gail Miller, owner of Rocky Mountain. “We are opening a satellite store here (Water Valley) in September.”