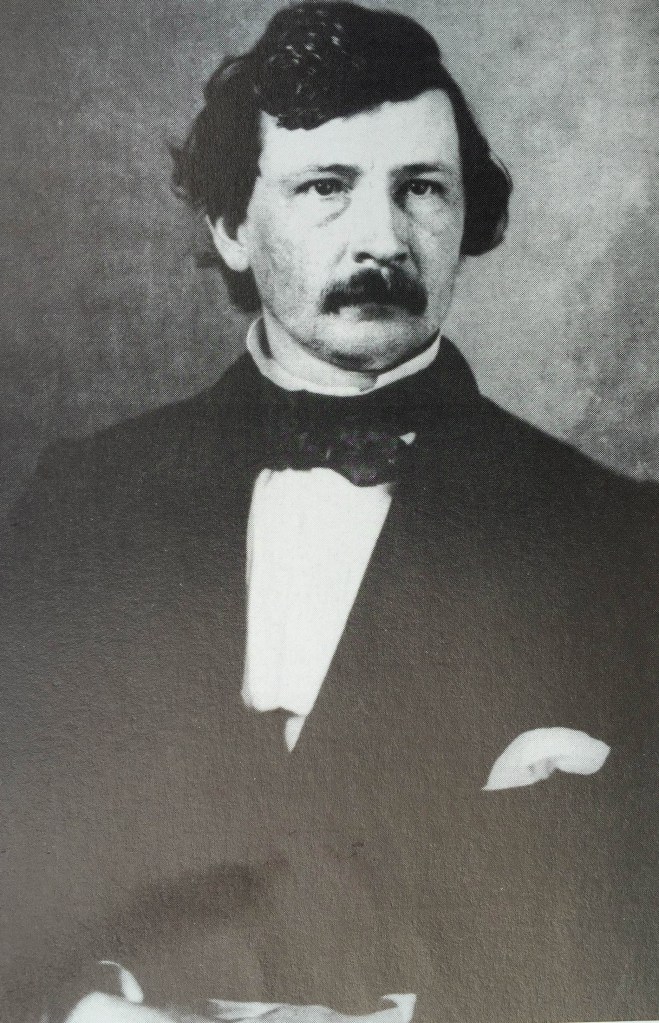 Did you ever wonder what photographer took all of the antebellum photographs of the early University of Mississippi campus? If it had not been for a Yankee, we would not have these photos. Luckily the photographer left his photographs on campus at the beginning of the Civil War and he never came back to the campus to retrieve his collection.

Capt. Edward Carlisle Boynton was born in Windsor, Vermont on Feb. 1, 1824. His college days were spent at West Point. He graduated in 1846 just in time for the Mexican War. In his graduating class were two Civil War generals who would make a name for their selves. In his class were Union Gen. George McClellan and Confederate Gen. Stonewall Jackson.

As soon as the young lieutenant graduated from West Point, he went directly to Mexico to serve with Gen. Zachary Taylor. At the close of the Mexican War, he would return to West Point as a professor of chemistry but later the position was denied him. He would blame Jefferson Davis, then Secretary of War, for his part in his not receiving a full professorship at West Point.

It is quite ironic that the next position he would hold would be in the home state of Jefferson Davis. In 1856, Boynton resigned his commission and he accepted the professorship of chemistry, mineralogy, and geology at the new state university located in Oxford. It was stated of Boynton that “he was an individualist and that he was a colorful addition to the faculty, although perhaps not a popular one.”

Boynton shared with Chancellor F.A.P. Barnard his attempt to make the university a “scientific university.” He also shared Barnard’s avocation as a photographer. As history has shown, he went north without the University of Mississippi photographs of the antebellum university. If it had not been for the Yankee, Boynton, we would not have the visual record of our university in its first years.

If you are interested in viewing the photographs that Boynton left on campus, the Department of Archives and Special Collections published a book that contains a great deal of Boynton’s photographs. The book was published in 1979 after an exhibition that was held in the J.D. Williams Library. The book is entitled “The University of Mississippi: The Formative Years 1848-1906.”

Boynton’s tenure at the university would end with his dismissal in September 1861. Unlike his fellow Yankee, Chancellor Barnard, Boynton’s sentiments and the outbreak of the Civil War decidedly with the “northern cause.” He had written a letter to his father, in the North, expressing his sentiments. The letter was intercepted in Memphis and opened. It was then passed on to the Board of Trustees of the University of Mississippi.

In a Board meeting in early September 1861, the Trustees were forced to dismiss Boynton for “evincing a want of attachment to the government of the Confederate States.” In exchange for safe passage out of the South, Boynton made a pledge that he would not serve in the field against the Confederacy. He kept that promise and returned to West Point, where he remained throughout the war. His duties were those of a quartermaster and adjutant.

While at West Point during the war, his interest changed from scientific inquiry to institutional histories and a comprehensive collection of George Washington’s army orders. At the end of the Civil War, he returned to civilian life. In 1872, he became the superintendent of the water-works in Newburg, New York. He would never return to the South or to the University of Mississippi. He would die on May 13, 1893.

Chancellor John Bewton Waddel, who served with Boynton as a professor before the Civl War and later as Chancellor from 1865 to 1874, said that he was a very accomplished chemist. He also stated that the young professor was a “profane swearer, and under provocation gave full vent to his irritation in words unbecoming any man.” You must remember that Chancellor Waddel was also a Presbyterian minister.

When Professor Boynton left Oxford and the university on Sept. 6, 1861, he left a letter with a box of glass negatives of the antebellum university. In the letter with the negatives he stated, “I leave this box of photograph negatives, on top of the southeast show case in the Chemistry Laboratory. I hope it will be respected, as I design to return, or send to Oxford to reclaim my other effects and this box, when tranquility is restored.” He never returned or sent for the negatives.