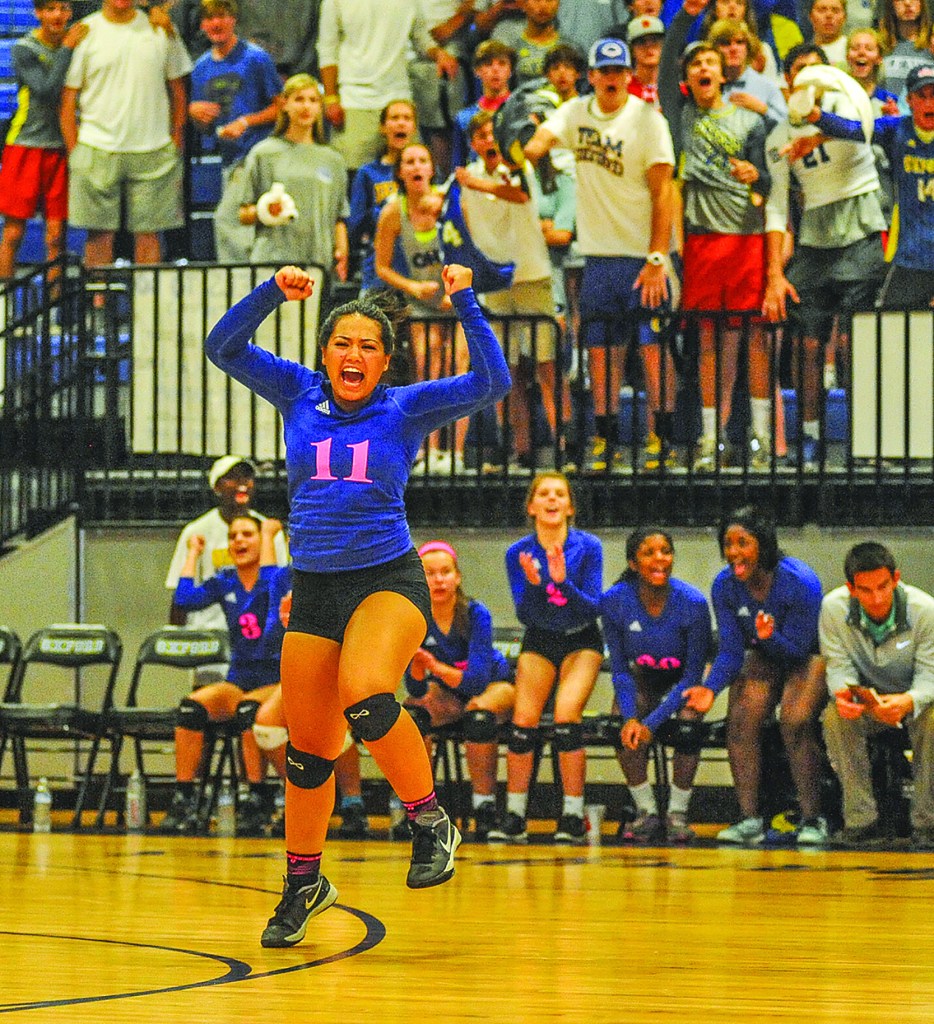 Oxford Highs’ Summer Batoon (11) and the rest of the Chargers are aiming to make a deeper postseason run and find themeslves in Jackson fighting for a state championship in October. (Bruce Newman)

Tara Ross is not shy about what she views as a realistic goal for her team. The Oxford High volleyball coach has a wealth of experience and seasoned players returning with only one graduation last year and two incoming players due to transfers.

“The biggest problem about this year is how competitive we are at every position,” Ross said. “I’ll be honest, I feel like if we don’t win (the state championship) this year that it would be a complete disappointment. Not to say that the girls didn’t give 100 percent or things didn’t go your way because there are a lot of things out of your control. I want to be able to say if that happens, it’s not because we didn’t do our part.”

The Chargers finished 28-9 last season, won the Region 3-4A/5A championship with an undefeated record of 8-0 and made it to the second round of the MHSAA Class II playoffs before falling to Corinth in a five-set battle. Ross and her squad have the talent and the capability to take another step further this season.

To make it to Jackson for the state championship will require much more.

Anna Kate Joyce graduated in May but is replaced by a group of six rising seniors. Maggee Hobson, Summer Batoon, Haley Caradine, Jessica Hill, Jasmyne Price and Ragan Freeze anchor a group that Ross views as the most experienced she’s had in her 10 years at Oxford.

“There are times that I have maybe didn’t sub in when I should have in past years because I was unsure of who to put where,” Ross said. “I don’t feel like I have that problem this year. I feel like there is always going to be someone that I can confidently put in the game and at that moment know they are going to take care of business. I like having that feeling.”

The majority of Oxford’s defensive and offensive production is returning with Hobson leading last year’s scoring attack with 338 kills in 96 sets played. Hobson also had 121 aces. As the season went on, Ross’ main threat at the front of the net got better, and she is expecting that to continue this season beginning Tuesday against Lafayette.

Defensively, the top six statistical leaders are returning with Ragan Freeze at the top with 374 digs in 74 sets played from a season ago. Her sister, and rising junior, Jordan, follows that with 292 digs of her own. Hobson had 211 while Batoon recorded an even 200.

New faces
Oxford is getting boosts from a couple players in transfers Savannah Nagle and Lucy Moore. Nagle is a transfer from Louisville, Kentucky, via Memphis while Moore is coming in from Hattiesburg.

Ross has not seen much of Moore in terms of live action as she never encountered Moore on the other side of the net but has liked what she’s seen during limited summer workouts and the two camps the Chargers attended at Ole Miss and in Tupelo.

The season opener against crosstown rival Lafayette will be Tuesday at the Oxford High gym at 6 p.m. with a junior varsity match set for 5 p.m.