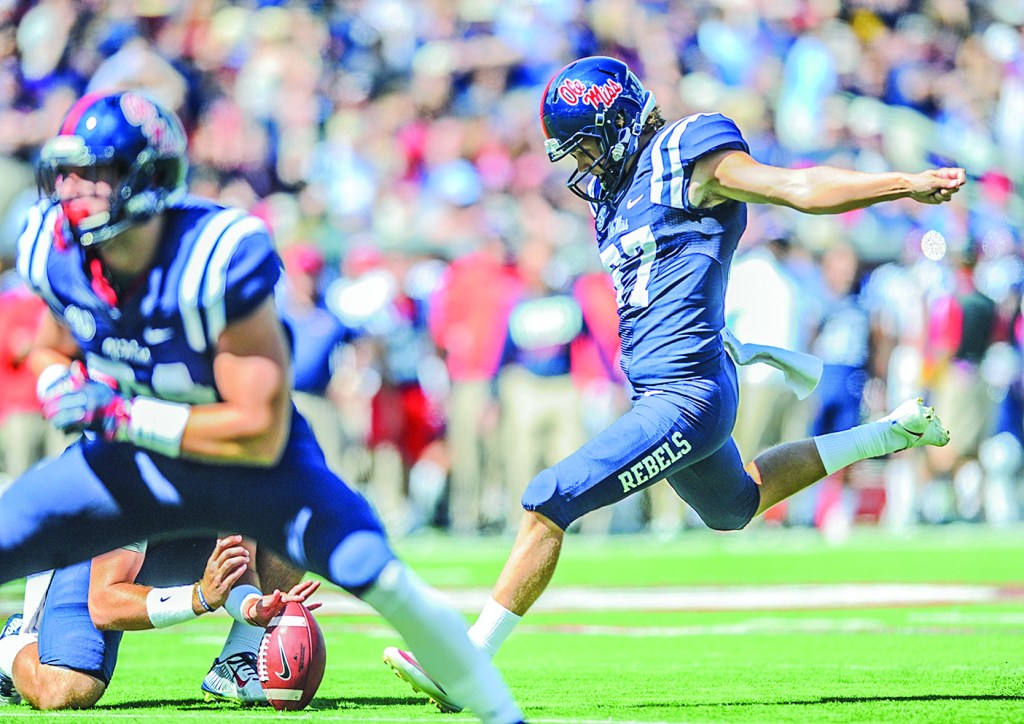 Gary Wunderlich, right, returns as the Rebels’ placekicker but there are questions when it comes to other facets of Ole MIss’ special teams corps. (Bruce Newman)

EDITOR’S NOTE: This is the last of a 10-part series breaking down each position on Ole Miss’ football team entering fall camp. A different position has been featured each day leading up to the Rebels’ first day of practice today.

Ole Miss has a good foundation this season when it comes to its group of specialists, a position that can often be the difference in winning and losing.

But there are some things the Rebels have to get sorted out.

The Rebels have their placekicker back in Gary Wunderlich, who enters his second season handling the duties full-time after a strong sophomore campaign. The Memphis native was 19 of 25 on field goals and made all 63 of his point-after attempts to finish tied for third in the Southeastern Conference in scoring at 9.2 points per game, tops in the league among kickers.

Aussie punter Will Gleeson will pair with Wunderlich to make what should be one of the top kicking duos in the SEC. Gleeson averaged 40.7 yards on his punts last season while his directional kicks helped Ole Miss field one of the best punt return defenses in the country, limiting opponents to less than 6 yards a return. Senior Nathan Noble is back as the kickoff specialist after recording 54 touchbacks a season ago.

How the Rebels will fare when opponents are kicking to them is the real question.

Ole Miss netted less than 18 yards on kickoff in which they returned last season, ranking next to last in the league in that category, and that was with Jaylen Walton serving as the team’s primary return man. Walton is gone now.

Ole Miss was even worse when it came to returning punts, ranking last in the league at a measly 3.37 yards per return. Simply catching punts became a problem as the season wore on, resulting in the Rebels moving the reliable Collins Moore back there, but Moore is gone, too.

Senior speedster Carlos Davis could be the favorite to take over at both return spots after being the primary punt returner last year before a knee injury ended his season early. Markell Pack, Quincy Adeboyejo, Van Jefferson, Montrell Custis and Jalen Julius are among those who could also get looks in fall camp as the Rebels try to shore up what was a sore spot a season ago.