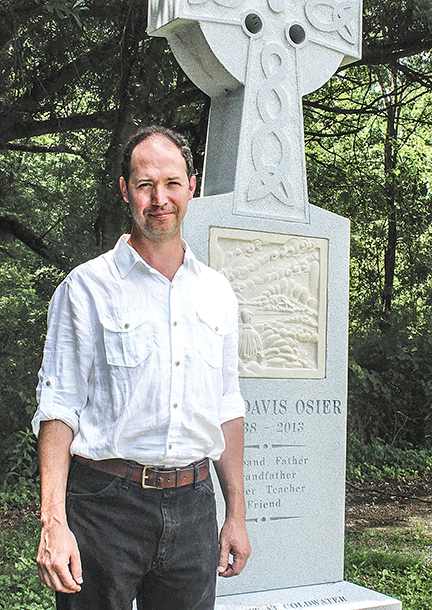 Northwest Community College Sculptor Jared Spears was contacted to create a monument for the family of John Osier, a Northwest educator.

In his obituary, John Osier, a beloved Northwest Mississippi Community College English instructor was described as “a quiet, private, common and remarkable man.”

The published author of four novels and numerous short stories and magazine articles, Osier was a “household name” around Northwest for the 35 years he taught at the college. In 1993, Osier was honored by the Senatobia Chamber of Commerce as “Higher Education Teacher of the Year.”

That was also the same year an 18-year-old freshman, Jared Spears, sat in Osier’s summer creative writing class and dreamed of becoming a writer like his teacher. Although writing was not to become Spears’ career, he drew inspiration from Osier that has helped him in not only his own teaching career, but his career as an artist and sculptor.

When Spears was approached by Osier’s widow Barbara and asked to sculpt the monument for Osier’s grave, he jumped at the chance. “I told her that I had known John and had admired him. That made this whole project pretty special to me. Just the serendipity of it all,” Spears said.

Spears is no stranger to Northwest. He spent his first five years living on the Senatobia campus. His father, Dr. Gary Lee Spears, who served the college as Registrar for many years, is in his 11th year as president of the college, and his mother Marilyn spent 26 years as an Early Childhood Technology Education teacher and was director of the program for many of those years. As a child, Spears was well acquainted with renowned Northwest potter Lane Tutor, who allowed him to practice and explore art in his studio.

“A bunch of us kids from Senatobia High School tried to get a jump on things and took the creative writing class in the summer from Mr. Osier. I just thought he was cool, and that is the only way I could have described it back then, but it was so much more than that. He knew his material so well and he knew how to put it out there in such a way that we could understand whatever he was trying to teach us. He was such an inspiration and had such a command of the classroom. I still do things in my classroom today that I learned from him,” Spears said. “John really inspired me to write and articulate myself and to be fearless and not so worried about how I am received, but to put my ideas out there and be confident and secure.”

“John would have been pleased to know that he had made a difference in some of his students’ lives. Although teaching was a way to pay the bills and still have time to write, he truly enjoyed teaching and sharing his love of literature with his students,” Barbara said.

“I got a classical art education there. You learned not only how to draw, but how to see. You cannot draw anything that anyone else can understand unless you can truly see the world as three-dimensional objects in light and shadow and reality. It’s a real tool that they gave me and it is something I use as a teacher today,” Spears said.

Spears received his Bachelor of Fine Arts in sculpture and printmaking from DSU in 1999. In 2000 he moved to Taylor, a thriving arts community, which in 2002 received the prestigious Governor’s Award for Excellence in the Arts. Also that year Spears decided to pursue his master’s degree from The University of Mississippi. He earned his MFA in scenic design in 2005 and was hired full time after graduation. He teaches design and drawing in the Department of Theatre Arts at Ole Miss.

A video documentary featuring Spears’ traditional stone-carving techniques is housed in the Rinzler Archives of the Smithsonian Institution’s Center for Cultural Heritage and was featured as part of the 2005 Smithsonian Folklife Festival in Washington, D.C.

In 2010 he and several colleagues received a Special Achievement Award from the Mississippi Institute of Arts and Letters for the multimedia collaboration piece, The Passions of Walter Anderson: A Dramatic Celebration of the Mississippi Gulf Coast Artist.

He and his younger brother Daniel have played together in various musical groups over the past 15 or so years.

“We like to play ‘ole timey’ regional music. We play music from the early 1900s with an emphasis on instrumentation — big groups with horns and strings. I play guitar and sing. We really lean toward folk, jazz and early rock and roll with an improvisational bent,” Spears said.

“I think Barbara and her son Wes were comfortable with me, and pretty much gave me carte blanche,” Spears said.

He presented his idea in drawings and maquettes to the Osiers. The Osiers liked what Jared had planned for the monument and agreed that he was the one they wanted to complete it. The sculpture took about a year to finish.

“I like the direct nature of carving stone. I think I am more exacting and deliberate in my approach. I have an agenda when I start,” Spears said.

For this project, Spears carved a limestone slab, which is recessed into the granite monument. The bas-relief is no more than an inch at its deepest. He worked with Mike Sanders of Batesville to create the base of the monument. He also created the lettering.

On the top of the monument is a beautiful Celtic cross.

“The reason Wes and I chose the Celtic cross was that John loved Ireland. I told Jared about the cross that John bought for me in Dublin on my birthday. He took a picture of it and that is the cross on the monument. That just shows the care and thought that Jared put into this project,” Barbara said.

“It is representative of the characters in his novels, but it is also him. The figure in the foreground is John, wearing the driver’s cap he often wore in later years. I think John always identified with his characters. In each of his novels, the central character always seeks refuge in an old building or a hideout in the woods. So it’s kind of an archetypal image of a man going on to the beyond. I wanted it to be timeless and stylized,” Spears said.

Spears is now working on a monument for another family, and hopes to continue to carve these types of monuments, but thinks that the Osier monument will always be special to him because of his relationship with the family and with Northwest.

“It’s a stately looking monument that I am really proud of, and I think the family is too. It is in a beautiful place in the cemetery, not far from where he lived, which I think is kind of special,” Spears said.

“John loved art, and that is one reason that my son Wes and I wanted this special monument to him. I feel that Jared captured John’s spirit and what he was about,” Barbara said.