Registration confusion keeps some from first day of school 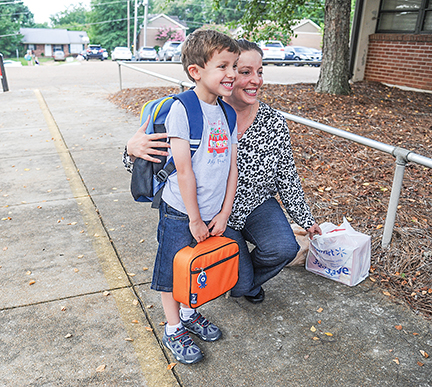 Virginia Pence, right, and her son James Waddell pose as the have a friend take their photo for the first day of school at Bramlett Elementary in Oxford, Miss. on Monday, August 8, 2016.

Some students in the Oxford School District missed the first day of school because of what appears to be a miscommunication over the district’s registration procedures.

Students waited in hallways or gymnasiums while their parents attempted to register them on Monday, the day classes officially started. One mother told the EAGLE she was told her child was registered via an email earlier in the summer and assumed everything was taken care of, but found out her child was not registered Monday morning. Another mother said she received a phone call Saturday saying her child

was registered, yet when she and her child arrived Monday, they were told they were missing documents.

The school district required all students to be registered online. After that first step was completed, parents were told to bring necessary documents proving residency and shot records to the school on certain dates throughout July.

“Some registered online but didn’t bring in their documents,” said School Superintendent Brian Harvey Monday morning. “We certainly want every child to have a great first day of school, and those whose parents completed the registration process correctly will have a great first day. But some did not follow all the steps and we’re working with them to get their child registered as quickly as we can.”

Harvey said the law requires the documents, and if the school does not have them on file, they cannot allow the student to attend classes.

“Some thought after they registered one child, their other children were registered automatically,” Harvey said. “Some thought if their student attended school last year, they were already registered. Others thought their spouse took care of everything.  Most of today’s glitches were human error.”

While some parents reported seeing 200 or more students waiting to be registered Monday, Harvey said the number was closer to 50.

“It’s common to have some problems on the first day,” he said.

Lafayette requires parents to come to the school during the summer months to register.

“We aren’t currently doing registrations online but we’re looking into it,” he said Monday afternoon.

The traffic congestion on Friday is typical Pugh said.

“A lot of parents want to walk their students into class the first day, and we’re completely fine with that,” he said. “It just makes for some congestion. But it’s not a negative thing. It’s just one of those things we know will happen on the first couple of days of school.

Pugh said traffic was better on Monday and expects morning and afternoon drop-off and pick-up to become faster and smoother with each passing day during the first week of school.

“Our afterschool program starts today (Monday) so that will also help the afternoon traffic,” he said.

Pugh said district-wide, there were about 10 to 15 people with registration issues on Friday but most had been cleared up by Monday.