Old police cruiser and development issues in the headlines 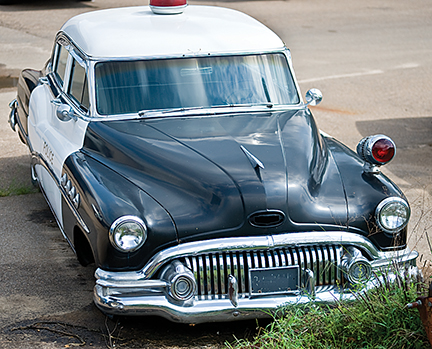 From an old police cruiser and fighting crime to growing pains with development, here are the headlines from this week in previous editions of the Oxford EAGLE for the year’s 1977, 1986, 1990, 2002 and 2013.

Barney could be wearing red

Red may be the new black – and white – for Barney, the 1951 Ford police car that has served the Oxford Police Department for almost 40 years.

What has become almost an iconic symbol in Oxford, the old police car broke down about a year ago and was put on a display in front of OPD.

“The display location was removed because of a drainage issue, OPD Chief Joey East said.

But Barney could soon have a new home.

Oxford Fire Chief Cary Sallis said he would be glad to take the old car and allow the firefighters to work on him between calls.

City regulations for the new subdivision will be compromised in the name of affordable housing, the Oxford Planning Commission decided Monday.

In separate 4-1 votes, commissioners denied requests from the developers of Eagle Pointe subdivision to suspend city requirements for sidewalks and underground utilities in order to lower the cost of individual lots.

Developers James Davis and Gary Coleman said the variances would have shaved about $2,500 off the price of each of the 100 lots in the Thacker Road subdivision. They had planned to offer the homes to first-time buyers and retirees for $90,000 to $100,000.

Despite repeated efforts, Jack McCormick’s hopes for developing land he owns on McLarty Road near the airport are growing dimmer.

McCormick says the land is prime for the construction of apartments or duplexes. But he has run into opposition on both the city’s planning commission and the board of aldermen in attempts to have the property rezoned to permit such development.

McCormick said the land on McLarty Road is practically worthless while zoned agriculture. He wants It rezoned so a multi-family development can be built.

Crime Stopper contributions are rapidly closing in on the targeted $10,000 mark, according to Assistant Police Chief H.C. Franklin.

Franklin, who is heading up the plans to initiate a Crime Stoppers program here in Oxford, said last week that contributions have surpassed the $8,500 mark with the contribution of a $1,000 donation.

He said he hopes the remainder needed to reach the $10,000 goal will be given within the next few weeks in order to fully activate the Crime Stoppers Progam.

“This is a proven program in several major cities and we feel that when it is put into effect here in Oxford, it will contribute to decreasing the crime rate effectively,” he said.

“We will continue to do everything we can to bring financial relief to the poor people of this state,” the Governor added.