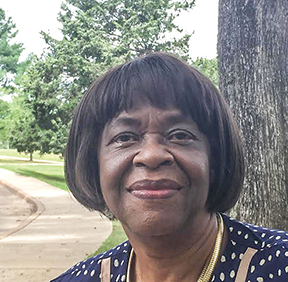 When Dorothy Butler decided to try volunteering for the Retired Senior Volunteer Program in Oxford, she was concerned with not being able to move around as freely as she’d like due to issues with her knee.

Butler would often call people from her church and in the community just to see how they were doing and check on them.

“Jamie Briscoe told me RSVP had a program just like that. I told her ‘Well, I can do that,’” Butler said. “So she gave me a lady to call and we talked.”

A firm believer in giving back to the community and showing love to others, Butler has at least three to four people who she calls every day. Her job is to sit on the phone and listen.

“I know how it is with having a disability,” Butler said. “You’re at home, you can’t drive, and you’re looking at four walls all the time. Don’t nobody come by to talk to you or see you. You’re just there looking at television 24 hours a day.”

Butler has been at RSVP for a year and absolutely loves her “job.” She refers to the people she talks to on a daily basis as her friends and has the patience of a schoolteacher. Butler will talk to them about anything from church to food to home décor — and she loves everything about it.

“You know everybody has a gift,” Butler said. “And growing up, I wanted to give. I thank God that he gave me this gift to share and care — for carrying people in my heart. It’s a blessing.”

Briscoe, with RSVP, said the companion program is where volunteers reach out to homebound senior citizens by calling to chat and check up on them to taking them to the grocery store and more. She said Butler spends 25 to 30 hours a month calling on folks.

“She’s just a really sweet lady who calls and checks on so many people each month,” Briscoe said. “She’s very caring.”