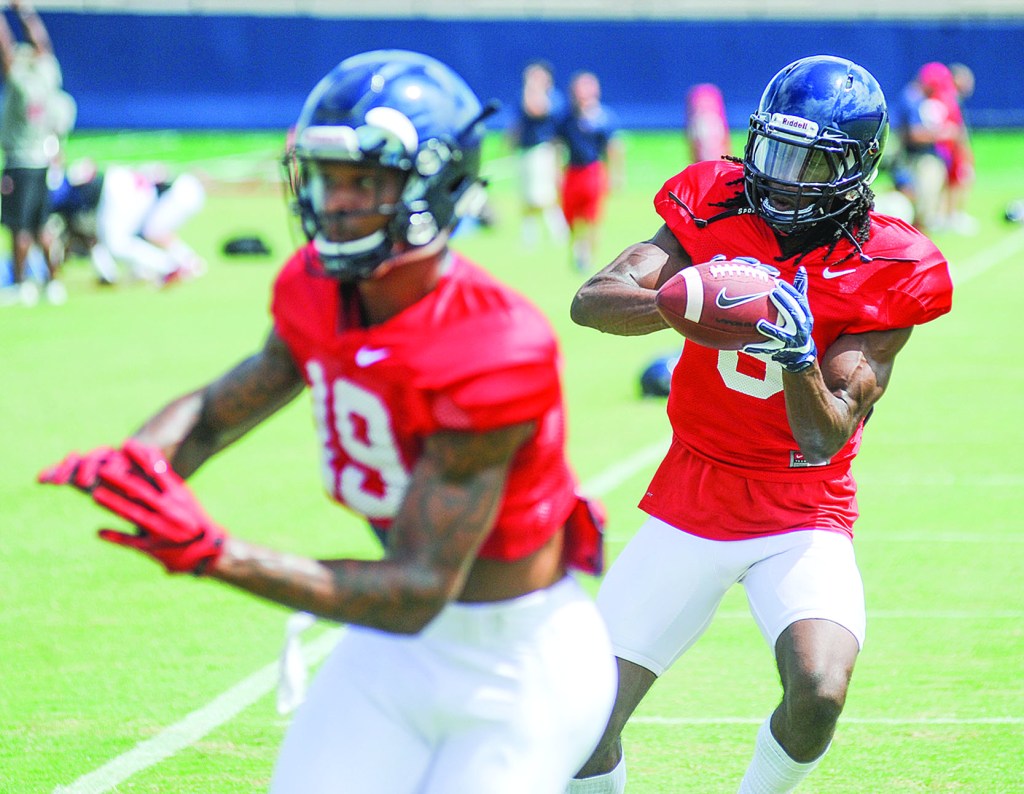 Ole Miss wide receiver Quincy Adeboyejo catches a pass during practice in Oxford on Thursday. The Rebels donned pads for the first time earlier this week and will begin two-a-days today in preparation for the season opener Sept. 5 against Florida State. (Bruce Newman)

The physicality is slowly being ratcheted up during Ole Miss’ fall camp. The Rebels have completed the first couple days of padded practices, and the results are a mixed bag for head coach Hugh Freeze as the first week of camp winds down.

As has been the case during each fall camp of the Freeze era, there is not much full contact or ground tackling as a way to try to avoid any significant injuries before the season begins.

“It’s been really good, a little sluggish (Wednesday),” Freeze said before Thursday’s practice. “We don’t take to the ground a lot anymore. We probably have two practices where we tackle to the ground. (Wednesday’s) tempo was not quite as good as (Tuesday’s).”

Freeze noted while typically the defense is the group that is further along at the onset of camp, a large portion of the offense’s performance has impressed him the most with quarterback Chad Kelly and the first team progressing nicely.

“Chad really has picked up kind of where he left off at the end of the fall,” Freeze said. “I think we’ve done some really nice things offensively. Defensively, there are moments, too, where they’ve dominated different pods in practice. It’s a pretty good battle thus far.”

Cooley improving
Evan Engram is the definitive No. 1 tight end, but there are several others working their way up the depth chart. Hunter Thurley and Taz Zettergren are second and third on the depth chart, respectively.

True freshman Octavious Cooley from Laurel is embracing and taking on a lot in his first week of camp but is showing potential to be the future at the tight end position.

“If he can handle the mental curve of learning everything that goes on at that position, he’s got the talent to be special,” Freeze said. “Time will tell if he is. No doubt he has the physique and athletic ability to arguably be the best we’ve had since I’ve been here all around. He’s not Evan in running routes, but he has the potential to be maybe more suited to be a little of everything.”

Injury update
The first casualties of camp have struck the Rebels with DaMarkus Lodge and Markell Pack suffering injuries this week.

Lodge took a hit to the head on Wednesday and sat out Thursday’s practice as a precaution. Pack has a torn tendon in his right hand that could cause him to miss considerable time and is the most concerning to Freeze.

Defensive end Fadol Brown was running during Wednesday’s practice after getting his walking boot removed earlier in the week. Safety Tony Conner did not participate in practice but was held out for precautionary reasons and did not suffer a setback in his return from a meniscus injury.