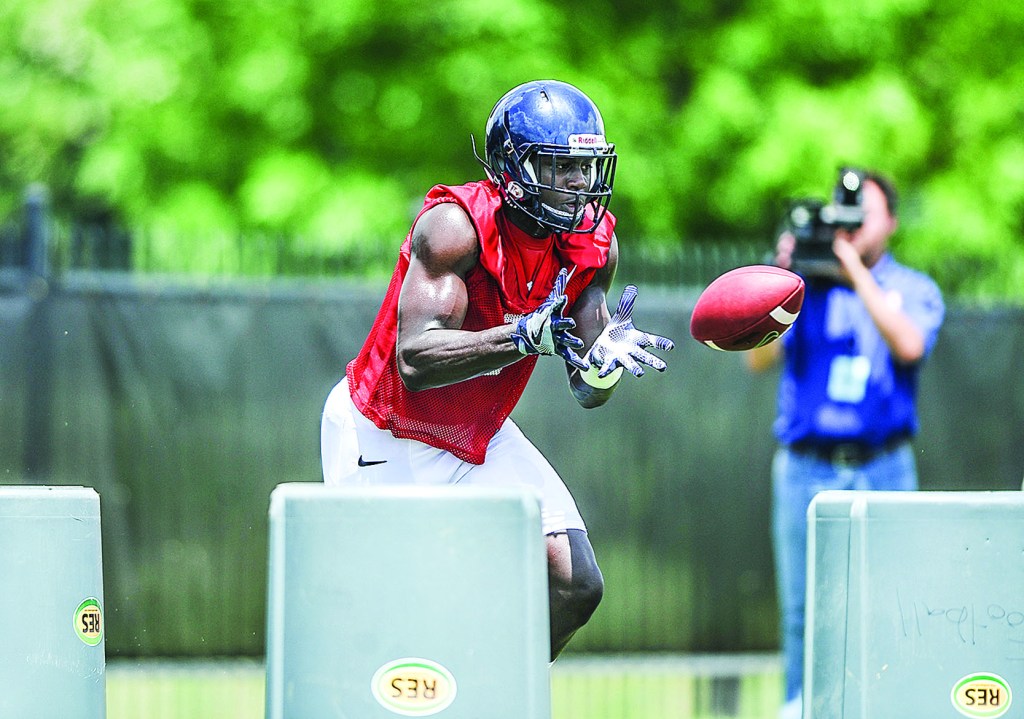 Ole Miss receiver A.J. Brown (1) is one of many true freshmen who have caught head coach Hugh Freeze’s eye during the first week of fall camp. (Bruce Newman)

The crop of talent brought to Ole Miss three years ago was unlike anything the football program had ever seen. Yet it’s this year’s group of newcomers that head coach Hugh Freeze said could be the best he’s assembled in his five-year tenure.

It didn’t take Freeze long to make that assessment about a signing class that’s already bested that 2013 bunch on paper.

“They’re good kids, and they’re obviously talented, but I think this could be our best class from just two days of being out there,” Freeze said Monday.

Ranked as high as No. 4 nationally by ESPN, the class is headlined by a trio of five-star signees in offensive tackle Greg Little, quarterback Shea Patterson and defensive tackle Benito Jones. Little, whom Freeze referred to as “super athletic,” is already competing with Alex Givens and Rod Taylor to replace Laremy Tunsil while Jones adds another talented youngster to the rotation along the defensive front.

“We do think (Little) is a really good future left tackle,” Freeze said. “When that takes place is hard to say. But he wants to do it, and he learns and he studies, so I think the learning curve, he’ll handle that well.”

Chad Kelly is entrenched as the starter behind center, but Patterson may be too talented to keep off the field completely. In addition to advanced mechanics and a quick release, Patterson has impressed with his ability to quickly pick up the offense since enrolling in January.

But whether Patterson actually plays won’t be decided until the games get here.

“He’ll be traveling with us, ready to play, and we’ll make that (decision) maybe even during the course of games,” Freeze said. “It’s not something we are going to discuss this early, but we’re getting him prepared to play.”

Young WRs impressive
The class also boasts depth with other newcomers who could help right away.

Receiver A.J. Brown will wear the No. 1 jersey made popular by Laquon Treadwell the last three years, but the two are already being compared for reasons other than a jersey number. The 6-foot-1, 225-pound Brown is built similar to the first-round draft pick while former Oxford standout D.K. Metcalf, at 6-4 and 217 pounds, is another big body who could force his way into the rotation out wide.

“I would be hard-pressed to say that A.J. wasn’t further along at this point (than Treadwell was as a freshman),” Freeze said. “What that means long-term, who knows? But he certainly has been impressive. So has D.K.”

Myles Hartsfield is penciled in as the starter at rover while Deontay Anderson, a 6-1, 217-pound thumper, is also likely to get snaps at safety with Trae Elston and Mike Hilton no longer around.

The Rebels are also counting on immediate help at linebacker from a pair of experienced newcomers in Rommel Mageo, a graduate transfer from Oregon State, and junior college transfer Detric Bing-Dukes.

“I love what I see,” Freeze said. “They’re learning. It’s a learning curve.”