Ole Miss bridge project to be complete by Sept. 7 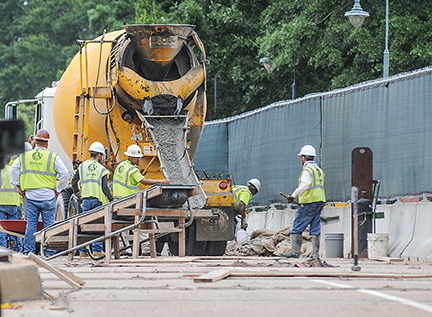 For the last several weeks, crews have been making upgrades to the bridge on University Avenue that crosses over Gertrude Ford Boulevard on the University of Mississippi campus. Initially, they planned to be finished with the work on Aug. 20 — two days before Ole Miss students return to class — but delays have caused the project to roll over into early September.

“The Gertrude Ford Boulevard closure is being extended two weeks,” Bannister wrote in an email. “Instead of reopening on August 20, 2016, GFB will now reopen on September 3, 2016. The project is still scheduled for completion on September 7, 2016.”

In May, the Oxford Board of Alderman voted to allow the university to close a portion of Gertrude Ford Boulevard to make the necessary repairs, which include stripping and repainting steel beams, replacing some bearing devices, adding steel plates to the beams and rebuilding the expansion joints.

The project was expected to begin in early June, but the university did not award a contractor and had to rebid the project. Crews began the work in late June.

The reason for the upgrades is to increase the bridges load capacity in anticipation of expected additional traffic next summer as the roundabout on Chucky Mullins Drive is constructed.

Safety has been at the forefront of the project, according to Oxford Public Works Director Bart Robinson, and temporarily closing Gertrude Ford Boulevard has been necessary.

“I did not believe it was safe to reopen Gertrude Ford Boulevard while work was still being performed,” Robinson said Thursday. “The risk of falling concrete was just too great.”

Robinson reminds motorists this is not a city of Oxford project and he has not known very long about the delay.

“Remember, it is a university project,” Robinson said. “I was notified a little over a week ago that the completion will be delayed. It is my understanding that it will be completed in early September.”

Although there have been lane closures, traffic is being allowed over the bridge during construction and Gertrude Ford Boulevard is open, except for the area near the bridge.