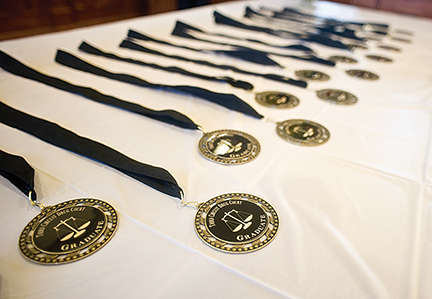 Instead of throwing drug abusers in a jail cell, more and more states are implementing drug courts as an alternative to prison.

Nationally, there are now 3,057 drug courts, a 24 percent increase in the number of drug courts in the last five years, according to the National Association of Drug Court Professionals.

Circuit Court Judge Andrew Howorth spearheaded the effort to form a drug court more than nine years ago and is still the administrator of the program.

Drug courts seek to rehabilitate drug-using offenders through drug treatment and intense supervision with frequent court appearances and  random drug testing.  Drug courts offer the incentive of a chance to remain out of jail and be employed and the sanction of a prison sentence if participants fail to remain drug-free and in compliance with all program requirements.

On Tuesday, the Third Circuit Drug Court will hold it’s 11th graduation with 19 participants receiving certificates of completion after spending three or more years in the program. The program currently has 231 people enrolled.

“We have about all we can manage in one space,” Howorth said of the drug court.

Circuit Court Judge Kelly Luther will soon be holding Drug Court in Ripley County to accommodate those in the program who live in Tippah, Benton, Union and other counties that are closer to Ripley than Lafayette County. The Third Circuit District Drug Court serves Benton, Calhoun, Chickasaw, Lafayette, Marshall, Tippah, and Union counties.

“This will help the population who have a hard time getting to Oxford every week,” Howorth said.

“It’s such a rigorous program,” he said. “We’ve had addicts choose to go to prison rather than drug court because they thought it was too hard. We get a lot of people who haven’t made up their minds to change. They think they’re going to con their way out and then find out they can’t. Either they fail or they figure out they want to succeed and start to take it seriously.”

Howorth said Oxford and Lafayette County are fortunate to have the Drug Court that is making an impact on many of their citizens’ lives.

“Those who have succeeded are now clean, getting their children back, getting jobs, going to school,” he said. “They’ve done it and it’s working for many of them.”

Howorth said some past graduates keep in touch to report in and tell them they’re still doing well.

“Some do relapse after they lose that accountability,” he said. “We hear a lot of good things, and we also hear not good things. But people who have had some period of sustained recovery and have relapsed, generally find recovery again because they now have the skill set to find that recovery again.”

“This report demonstrates that drug courts and other treatment courts are expanding evidence-based criminal justice reform nationwide,” said Carson Fox, a co-author of the report and chief executive officer of NADCP. “There is still a tremendous need for resources to expand these life-saving programs to serve more individuals in crisis. We found that when we talk to drug courts they say the main challenges they face are insufficient funding and lack of resources for treatment or supervision, not an absence of community need or judicial interest.”

The full report is available online at Allrise.org/pcp.