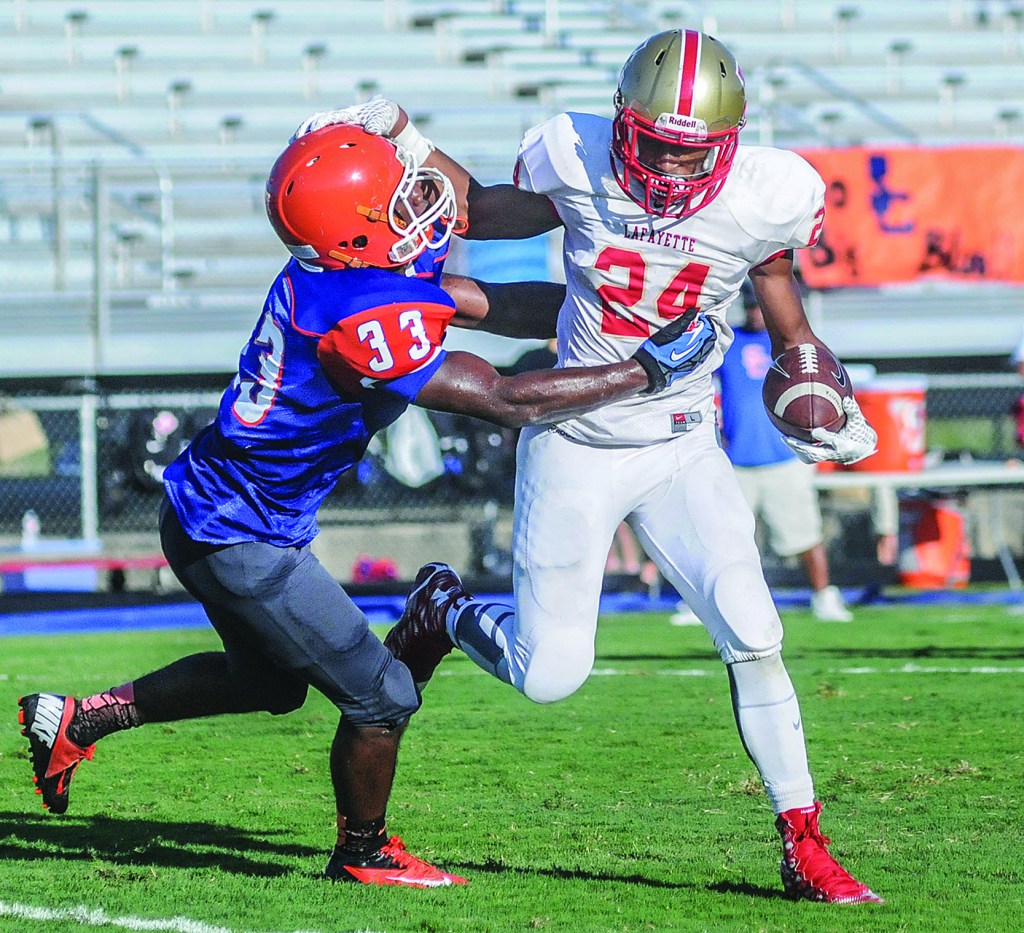 Lafayette’s DD Miller (24) tries to get past Southaven’s Michael Johnson during a high school jamboree in Southaven on Friday. The Commodores lost 14-0. (Jake Thompson)

SOUTHAVEN — Preseason exhibitions are hard to tell how a season will go, especially when they last only half the time a full game would last. That did not keep Lafayette coach Michael Fair from finding positives in his debut as the first-year coach of the Commodores.

Lafayette was shut out by Southaven, 14-0, in its jamboree game on Friday night at Southaven High School. The varsity teams played two quarters — the junior varsity played one quarter before them — with the Chargers scoring both touchdowns in the opening 12 minutes.

“We’ve got a real young football team with the guys that are being called on hadn’t been called on much and (at) different positions,” Fair said. “I’m excited where we are. I feel like we have a lot of room for improvement.”

Two big plays by Southaven, one on offense and one on defense, led to each score. The Chargers’ touchdowns were both runs of less than 5 yards.

Lafayette quarterback Will Ard tossed two interceptions. One led to the opening score by Southaven and the second came with six seconds remaining in the final quarter. The senior went 8-for-9 for 44 yards. Ard also showed he could take it to the ground if need be, running for 11 yards and converting a first down late in the game.

The Commodores struggled to get anything going early as penalties stalled drives. On the opening possession, Ard was flagged for not having his mouthpiece in quick enough before the play started, moving Lafayette back 5 yards. They were unable to convert on third down.

Jamarcus Quarles cemented himself as the Commodores’ No. 1 running back as he carried the bulk of the workload, rushing for 63 yards on 14 carries. Sophomore Jason Sawyer had a couple of carries as well.

“I thought (Quarles) ran hard, broke a lot of tackles,” Fair said. “You saw (Friday night), he’s got a burst. I think Jamarcus is going to have a good year.”

Lafayette will open up the regular season this Friday when the Commodores host Horn Lake at 7 p.m.

Meagrow injured
The junior varsity quarter ended in a scoreless tie. The biggest news to come out of it was a potential blow to Lafayette’s depth at halfback. Zach Meagrow suffered what was initially diagnosed on the field as a dislocated elbow early in the quarter.

The sophomore had been impressing Fair during fall camp.

“(Meagrow) had been working himself up at our H-back position,” Fair said. “He’s a 10th-grader who was fighting for a job, and we talk about it all the time. Hopefully he’ll come back pretty soon.”