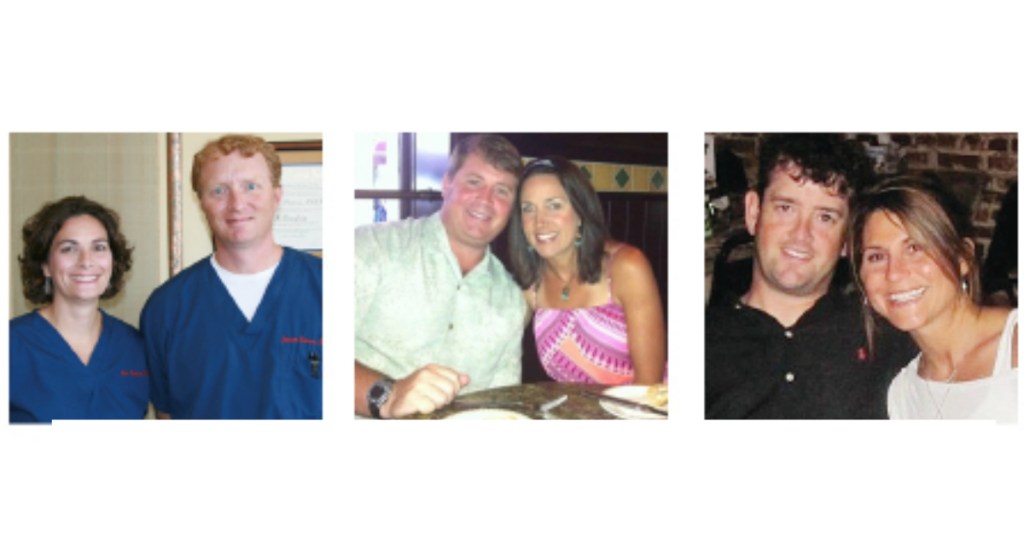 They created smiles, figuratively and literally. They coached children to be their very best. They cared for people.

They all called Oxford home and on Sunday, their hometown mourned their loss.

Drs. Jason and Lea Farese, Dr. Michael and Kim Perry and Dr. Austin and Angie Poole were killed Sunday morning when the plane they were traveling in crashed in Northport, Alabama. The three couples were returning home to Oxford from Florida where they attended a dental convention.

“On behalf of Board of Aldermen, the entire community, well, it just saddens us to the bottom of our hearts,” said Oxford Mayor Pat Patterson. “Everyone on that plane was generous with their talent and resources to the community. It’s just an unspeakable loss.”

Patterson said the city’s flags have been lowered in respect to the families.

The Fareses leave behind three children, the Perrys leave three children and the Pooles, five children. Many of the children attended schools in the Oxford School District. Superintendent Brian Harvey said he could not release the names of the students who attended Oxford schools, but that counselors will be ready to meet with students who are struggling with the loss, since many of the children might have known those lost as their own dentist, and in Jason Farese’s case, their coach.

“We have reached out to the University of Mississippi Counseling Center and have already received several offers from local clergy to help should it be needed,” Harvey said. “Grieving is part of this process and we will all grieve the loss of these individuals in our community. The impact of this tragedy will be felt for many years. Their influence went far beyond their professional lives. Our community has suffered a great loss. Our thoughts and prayers go out to the families of these individuals. Their children will need all of us in the days, months and years to come.”

Prayer vigils were held at  Oxford Middle and Oxford High schools this morning.

Funeral arrangements are incomplete at this time.

A community vigil will be held at 5:30 p.m. tonight at the Grove on the University of Mississippi campus, led by local churches.

Dr. Jason Farese is a native of Ashland and a 1997 graduate of Vanderbilt. He attended the University of Mississippi School of Dentistry, along with his wife Lea, who is a native of Pearl. The two have worked together at their clinic, Farese Family Dental in Oxford since 2004.

Jason not only helped give children great smiles, he helped them achieve self-confidence through coaching them in sports. For the Oxford Park Commission, he coached basketball and flag football. At the Oxford-Lafayette Sportsplex, he coached the U-10 Yalobusha Giants and led them to a World Serious Championship in July. He was a former Vanderbilt University baseball player. He and Lea met in dental school.

“Lea Farese was a high school friend,” said Mollie Allen. “She was truly one of the sweetest, most kind-hearted people I have ever met in my life. She was always ready with a smile or a kind word. The world is a darker place without her.”

“I had immense respect for the dental skills of Jason, Lea, Michael and Austin,” Wooten said. “Jason was an experienced and conscientious pilot. I join the Oxford dental community in expressing my profound sorrow at the loss of my colleagues and friends.”

To those who knew Dr. Michael Perry, he was more than a dentist. He gave his time and money to supporting academics, as well as youth sports.

Perry was the driving force behind the Oxford-Lafayette Sportsplex that opened just a few years ago and now gives even more children the opportunity to compete in athletics.

The facility is located on 73 acres on Highway 7 and is home to the Mississippi Flood Futbol Club comprised of girls aged 10-12 years old. Chuck Trost directed the youth squad and credits Perry with investing “countless hours and money so the kids of North Mississippi could have a place to play.”

“Michael was one of my closest friends,” Trost said. “He would do anything for kids. No matter what we needed he would always provide it for us. He has touched countless families with his generosity. We are hurting right now as we try and grasp this terrible tragedy.”

“Michael and Kim were what we all strive to be,” wrote Kristin Pray Gaines. “Both were very kind hearted people, giving their time and money to make sure everyone had a place to play soccer. Your social status or your income did not matter. Michael granted numerous scholarships to make sure no kid who wanted to play soccer would be denied. Yet when watching his kids play, he was ‘just a parent.’ I’m beyond heartbroken.”

“Michael Perry was the greatest boss I ever had. His beautiful wife Kim was an absolute angel,” wrote former employee Brandi Sanders Green. “I’ll never forget the glory days when there were just a handful of us busting our tails to build the practice.

“We had a paper appointment book in one hand and a Nokia phone in the other. We would leave Oxford at 5 a.m. and it never failed, we would get pulled over in Holly Springs. We traveled all over North MS to see patients, to do lunch and learn, to do marketing and now there are five practices … five practices mourning the loss of a great team leader and a hell of a surgeon … my heart aches their 3 beautiful children, the staff, the patients, the friends, the family.”

Originally from Brandon, Kim Perry was a nurse practitioner at the University of Mississippi, where she also studied nursing.

Dr. Austin Poole and his wife Angie have lived in the Wellsgate subdivision for couple of years, and own and operate a dental practice in Clarksdale.

“Everybody is extremely upset here,” said Wellsgate Home Owners Association president Frank Sibley. “A lot of people knew them and the children. We’re all just trying to adjust to this tragedy.”

Clarksdale Mayor Bill Luckett told WALB.com new that he knew Austin and Angie Poole, not only from their thriving Clarksdale business, but also because they all liked to hunt.

Community Church Pastor Fish Robinson has known the Pooles for most of his life. He grew up with Angie in Cleveland and went to Delta State University with Austin where they were brothers in the Kappa Alpha fraternity.

“The first thing that comes to my mind is their smiles,” he said Sunday. “I don’t ever remember seeing either one without a smile on their face. It’s the hardest thing for me to think about. They brought lots of smiles to others, too.”

Robinson said a loss like Oxford has experienced isn’t one that will heal overnight.

“There are no answers,” he said. “People want to know why. As a man of faith, I have to believe God is in control. Sure, it doesn’t seem right. It doesn’t seem fair. But if you’re going to pray to God in the good times, you have to pray to him during the bad time too. Don’t push God away, lean closer. God can teach to us through these experiences.”

“These children will need us to be there for them,” he said. “Whether it’s a hug, a shoulder to cry on, to minister to them in every way possible. So many were impacted by this loss. They all meant so much to so many people.”