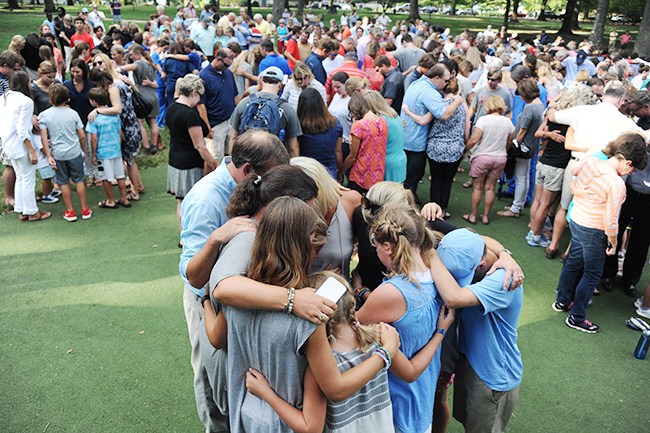 Almost as soon as LOU community members started to hear about the tragic plane crash that claimed the lives of six of our own, support for their surviving loved ones started to pour in from all directions.

Drs. Jason and Lea Farese, Dr. Michael and Kim Perry and Dr. Austin and Angie Poole were killed Sunday morning when the plane they were traveling in crashed at about 11:20 a.m. in Northport, Ala. The three couples were returning home to Oxford from Florida where they attended a dental convention.

The National Transportation Safety Board is still investigating the cause of the crash.

NTSB investigator Heidi Kemner, speaking Monday to reporters during a briefing on the crash, said she had located the pilot’s log book and would try to locate aircraft maintenance records.

Combined, the couples left behind 11 children, with the youngest in kindergarten and the oldest a freshman at the University of Mississippi. 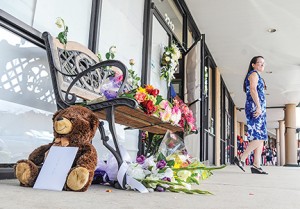 Bruce Newman
Flowers are placed at the door to the Farese Family Dental office Monday. Dentists Dr. Jason Farese and his wife Dr. Lea Farese, Dr. Austin Poole and his wife Angie Poole, and Dr. Michael Perry and his wife Kim Perry were killed in a plane crash outside Tuscaloosa, Ala., Sunday.

Business owners around the downtown Square found simple black and white signs at their doors early Monday morning, passed out by an unknown man, with a simple message – Oxford Mourns – that were hung on the windows and doors of several businesses.

Many local citizens are using the sign as their Facebook profile pictures. Other memorial pictures, including a picture of Mississippi with the words, “Prayers for Oxford,” have been posted on social media networks. Words of sorrow and comfort have been posted online followed by the hashtag, #oxfordmourns.

Three separate online meal registration sites, where people can sign up for a day to bring the mourning families a meal, were filled up for the next 30 days within hours for each family.

“When my pastor’s wife called me late afternoon to let me know the news, within the hour we created a meal schedule,” said Shannon Richardson, who attends Grace Bible Church where the Pooles were members. “Within two hours the schedule was full. I’ve had people emailing me all day asking what else they can do. The response has been incredible.”

Monday evening, about 1,000 people gathered in the Grove on the University of Mississippi campus for a community prayer vigil. Fr. Joe Tonos with St. John the Evangelist Catholic Church, J.D. Shaw with Grace Bible Church and the Rev. Eddie Rester with Oxford-University United Methodist Church led the service.

“Times like this, there are very few words any of us can offer that are truly sufficient,” Tonos said during the vigil. “But your presence here is incredibly important.”

Shaw read from Romans, Chapter 8, and prayed for God’s presence and comfort for the family members and friends of the three families.

“We seek refuge in the shadow of your wings,” Shaw prayed.

Rester said while the Bible is void of a sufficient explanation of why tragedies such as the plane crash happen, the Bible does answer one very important question.

“What it does answer, is ‘Who?’” Rester said. “Who is with us in our sorrows, in our pain and broken-hearted moments? God is with us.”

After reciting Psalm 23, the pastors invited the crowd to pray on their own or in groups. Some groups were small, some were made up of 10 or more. Children and adults wept openly while clinging to each other.

The vigil ended with the crowd singing Amazing Grace.

Funeral services for the three couples are still being finalized; however, a joint memorial service for all three couples will be held at 10 a.m. Saturday at the Tad Smith Coliseum, according to Farese family member, Susan Farese.

“The Farese Family greatly appreciates, and is truly moved by all the outpouring of love and support family, friends and community have shown us,” wrote Farese on her Facebook page Monday afternoon.