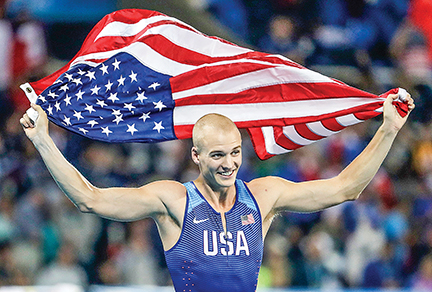 AP Photo/Natacha Pisarenko Bronze medal winner Sam Kendricks celebrates after the final of the men’s pole vault during the athletics competitions of the 2016 Summer Olympics at the Olympic stadium in Rio de Janeiro, Brazil, Monday.

After a solid showing during the qualifying round on Saturday, finishing in first with zero misses, Sam Kendricks was in prime position to finish on the podium by the end of Monday night.

Kendricks claimed bronze in the men’s pole vault competition of the Rio Olympics inside the Olympic Stadium. It is the first medal for the United States in pole vaulting since the 2004 summer games in Greece.

The Oxford native and first-ever Oxford High School alum to make it to the Olympics is now the first former Charger to become an Olympic medalist. Kendricks finished with a top-height of 5.85 meters (19 feet, 2.75 inches). 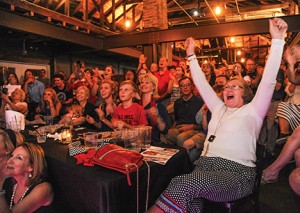 Bruce Newman
A crowd watches Sam Kendricks compete in the pole vault in the 2016 Summer Olympic Games in Rio de Janeiro, at Rafters on Monday.

Kendricks almost kept his Olympic journey alive, nearly clearing the bar at a height of 5.93 (19-5.5), which would have surpassed his personal-best mark of 5.92. In an upset, host-country Brazil’s Thiago Braz da Silva bested 2012 gold medalist Ranaud Lavillenie of France, clearing a height of 6.03 (19-9.50) to claim gold and set a new Olympic record. Czech Republic’s Jan Kudlicka and Poland’s Piotr Lisek rounded out the top five, both finishing with a top mark of 5.75.

“I know that the Olympics is like a high tide; it raises all boats and it brings the best out of all of us,” Kendricks said. “I was so happy to watch my friend Thiago (Braz) set his personal best in his home country in front of his home crowd, and I think that I thrived off of that as well.

“I did not set a personal best but I attempted it. I missed it very close three times, so I cannot be ashamed of my effort. I’m very proud of my bronze medal, what me and my coach (father and Ole Miss alum Scott Kendricks) and my family have achieved. This particular competition was a lot of fun for me — I knew all of the competitors by name, they’re all good friends of mine. We’ve traveled together and have competed together many times. We even trade victories very often.”

While Sam was in Rio competing, his mother, Marni Kendricks was attending a watch party at Rafters on the Square. As the vaulters started being whittled down from the starting number of 12, the anticipation of Sam making the podium was growing. For his mother it became a forgone conclusion even before Sam was guaranteed a spot.

“Once he was in the top five, I knew,” Marni said. “I started holding my breath. Because we talked about the fact that fourth place was nice but it didn’t really mean anything in the big picture for those who are serious about winning the competition.”

Sam breezed through the first mark of 5.50 but missed two attempts at 5.65 to clear it. After missing his first jump at 5.75 he passed and moved on to the next mark of 5.85. Due to passing after a fault at the previous height, Sam was only allowed one miss instead of the usual two.

Sam passed 5.85 on the first try and when Lisek missed as well, causing himself to be eliminated, it left three vaulters standing, and meant Oxford’s native son was bringing home an Olympic medal. The passing strategy paid off.

“(Sam) passed at a strategic place to have that opportunity for a medal,” Marni said. “That was the strategy that he and his dad talked about if it came down to that. They executed the plan and enough training and enough prep went into this that it worked out.”

Kendricks is the second person from the Oxford-Lafayette community to make it to the Olympics and bring back hardware. Former Lafayette High basketball star Jennifer Gillom also won a gold medal in the Seoul games as a player and then won one as a member of the coaching staff in the 2012 London games.

There is no rest for Sam, as he will now go to Europe and compete in seven upcoming events before re-starting his training with the Army reserves for 14 weeks, beginning in October.