POTTER: Sports have their place in real life 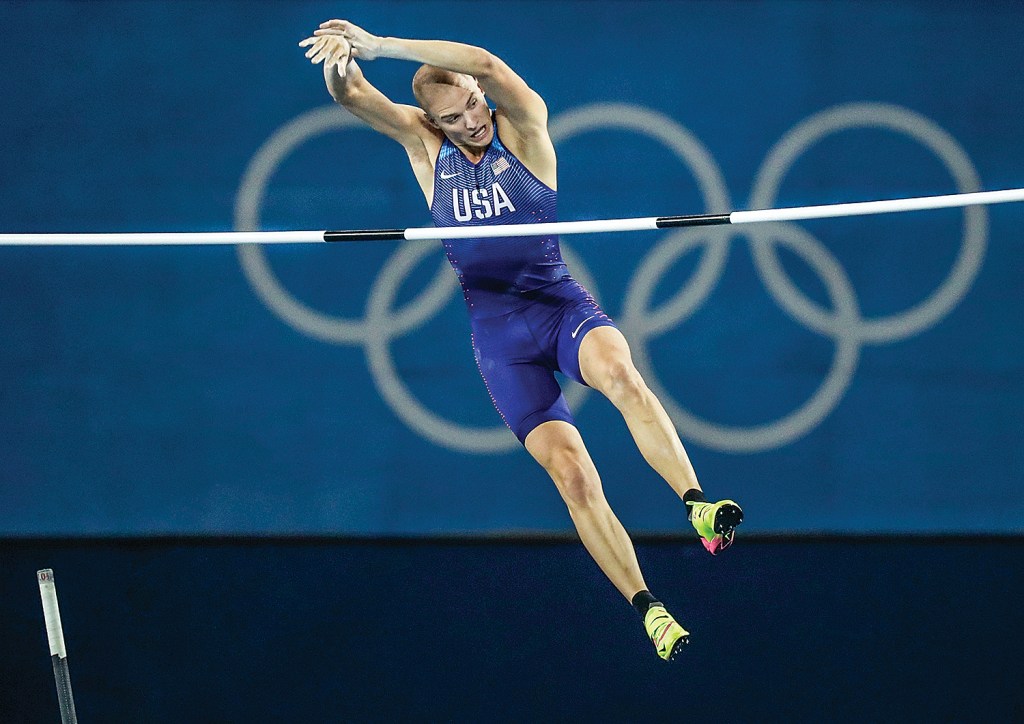 For a couple of hours at least, hometown Olympian Sam Kendricks made Oxford smile Monday at a time when the city desperately needed it. (Matt Slocum/AP)

It’s why I played them competitively all the way through some of my college years, and it’s why I switched my major from pre-med to journalism so I could continue to write and talk about them for a living (a word of advice for all you high school and college students: do something you love, and you’ll never work a day in your life).

And Lord knows I appreciate even the craziest of fans who spend money on this paper every day to read about them so I can keep doing what I love.

I also love what sports can do.

There’s no better example than what’s going on in Rio de Janeiro of the way they can bring people together regardless of ethnicity, race, religion, political views and whatever else to root for athletes for the unity of national pride.

I love how they can turn dreams into realities, how they can offer a way out for people who don’t have an alternative and how a sporting event can be an escape from everything else, even if it is just for a few hours.

Hometown kid Sam Kendricks did everything he could to give Oxford some relief Monday night, medaling in his first-ever Olympic competition.

Perhaps more than anything, Kendricks simply gave a community in mourning a reason to smile when it had six reasons not to, even if just for a little while. To say Oxford needed it is an understatement.

Because as I started to see the news pop up on my Twitter timeline early Sunday afternoon, everything else seemed so trivial. And by now, you’ve heard the news.

Oxford residents Jason Farese, Michael Perry and Austin Poole and their wives, Lea, Kim and Angie, were killed late Sunday morning when the small aircraft bringing them back from a dental seminar in Florida crashed near Tuscaloosa, Alabama. I never met any of them, but from everything I’ve heard and everything I’ve read about them in the stories our news department has cranked out, they were pillars in the community.

Now six sets of parents are trying to cope with the unfathomable grief of losing a child, and 11 children will now grow up without a mother or a father.

Tragic doesn’t begin to describe it.

It’s the second time in seven months this community has been punched in the gut with news like this. No one will soon forget the death of Ole Miss volleyball player Ty Laporte, whose life ended when her car was struck by an 18-wheeler in nearby Benton County back in February.

Word of Sunday’s crash also made me empathize with the ones who are left behind.

It’s been a little more than a year since I lost an uncle to suicide, something I haven’t mentioned publicly until now. I still can’t find the words to broach the subject with my mom or anyone on her side of the family because, well, there aren’t any.

But life isn’t always fair, and the way some people go out sure isn’t.

It’s all yet another reminder that this life we all live is short, and many of the things in it are trivial. Remember what’s important. Be nice to people. You never know what somebody’s going through.

You can still support your favorite teams and athletes such as Sam, too. Clap until your hands are sore, scream until you’re hoarse, and please keep buying this paper so you can continue to read about what they’re doing. Some of it is pretty amazing.

But do it all after you’ve hugged the people you cherish and told your loved ones that you do indeed love them. You never know when that display of affection will be your last.