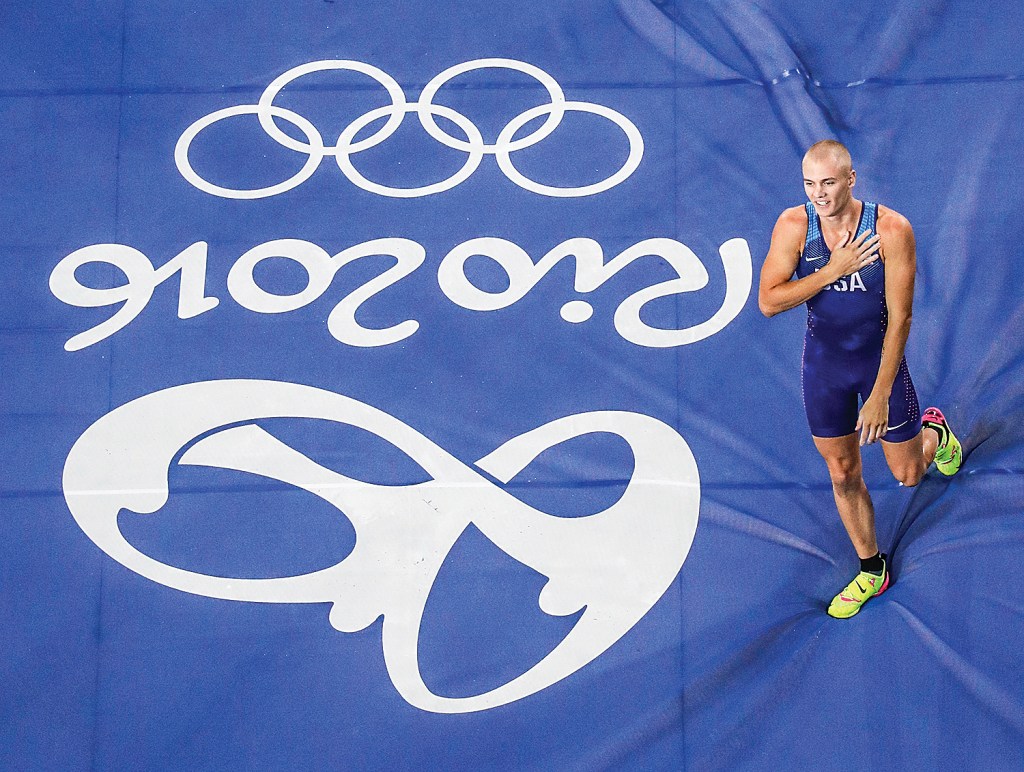 United States’ Sam Kendricks acknowledges the crowd after his final attempt in the pole vault finals during the athletics competitions of the Summer Olympics at the Olympic Stadium in Rio de Janeiro, Brazil, on Monday. The Oxford native won the bronze medal in his first-ever Olympic appearance. (Morry Gash/AP)

Sam Kendricks became Oxford High School’s first-ever Olympic medalist Monday night when he claimed the bronze in the men’s pole vault. Hundreds of people gathered inside Rafter’s on the Square to cheer on their native son, though it almost did not happen.

On Sunday morning, Oxford was struck with the tragic news that six residents lost their lives in a plane crash outside Huntsville, Alabama. With a town hurting, the Kendricks family had a decision to make.

Sam’s parents, Scott and Marni Kendricks, came to a conclusion Monday morning that continuing to hold the watch party is what Dr. Jason and Lea Farese, Dr. Michael and Kim Perry and Dr. Austin and Angie Poole would have wanted to take place. So it did.

With family and friends in attendance, a day that started with mourning ended in celebration as Sam nearly set a new personal best but in the process claimed third place in his first Olympics ever.

“I could not believe my eyes,” Marni said of the watch party’s turnout. “I was absolutely overwhelmed by seeing so many people here. I had no idea if 12 people would come or if it would be a packed house.”

Before the festivities began, including a video tribute to Sam from the Army reserves, which he is a Second Lieutenant in, as well as a video chronicling Sam’s journey to Rio de Janiero, Community Church’s Fish Robinson gave an opening statement and a prayer, honoring the Fareses, Perrys and Pooles. Robinson also mentioned Sam was jumping in their honor Monday night inside the Olympic Stadium.

“When Marni and Scott talked to me about (Monday night), it’s hard not to think about Sam being an Oxford boy, going to Ole Miss and being an Ole Miss guy,” Robinson said. “Dr. Farese loved Ole Miss. Dr. Perry loved Ole Miss, and I know Austin did. Austin would have had no better place to be than the Left Field Lounge with his Rebel fans at a baseball game. He would love the fact that we were celebrating a Rebel at the Olympics.”

In a dark time in this town’s history, one of its own provided a little light and started the healing process that will take a long time to complete.