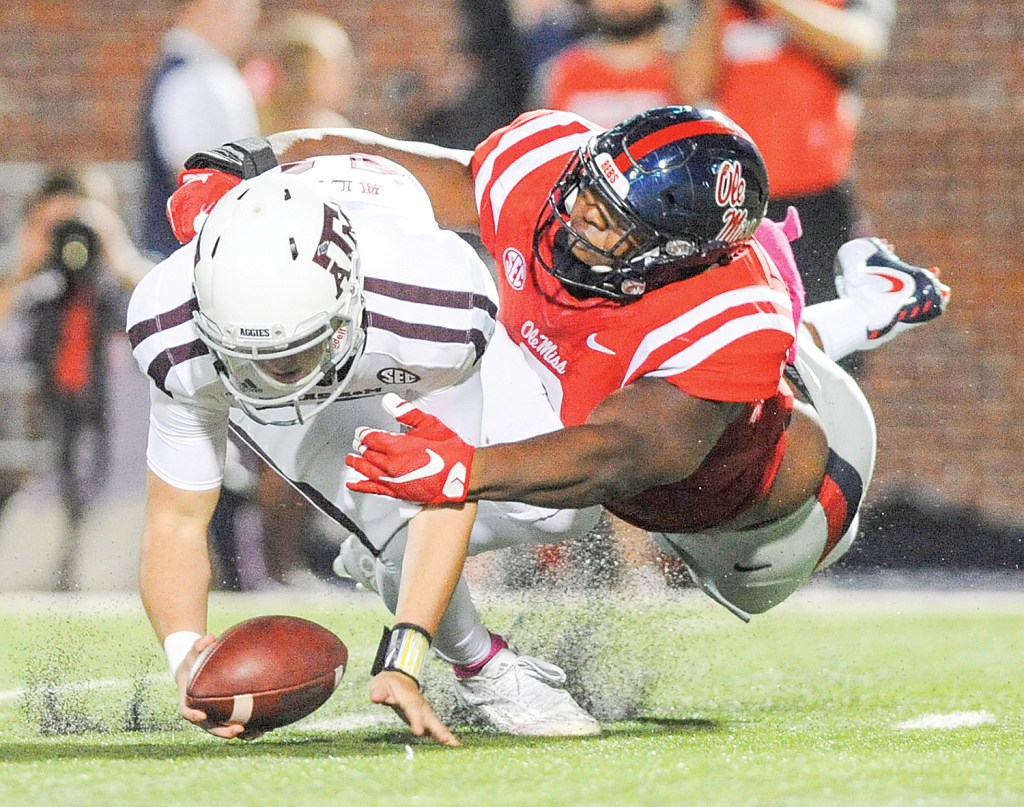 With Robert Nkemdiche off to the NFL, sophomore Breeland Speaks takes over as Ole Miss’ full-time starter at defensive tackle. (Bruce Newman)

Breeland Speaks has been preparing for this.

Robert Nkemdiche’s early declaration for the NFL left a void in the middle of Ole Miss’ defensive line, but unlike many teams that lose a first-round draft pick, there wasn’t angst among the coaching staff about how to go about filling it.

There wasn’t any competition either.

Speaks immediately stepped in at defensive tackle and will go through his first season as a full-time starter this fall as a third-year sophomore after spending last season as Nkemdiche’s primary backup, flashing the skill and athleticism that made him a highly touted recruit himself coming out of Jackson Callaway.

That experience has Speaks at ease about replacing the nation’s former No. 1 overall recruit and one of the best players to ever come through the program.

“If I did that last year and I was only his backup, then you would expect that again,” Speaks said. “That’s kind of my mindset with that. I’m just going to go out there and play my hardest like I always do.”

What Speaks gave the Rebels last year was unusually high production for a part-time player.

Speaks played in all 13 games and finished with more tackles (32) than Nkemdiche (29) despite starting just two games. When Nkemdiche was suspended for the Sugar Bowl, there wasn’t much dropoff as Speaks paired with rising senior D.J. Jones to collect seven tackles and help the Rebels hold Oklahoma State’s high-flying offense to 63 rushing yards in a 35-20 rout.

“To do that and actually have success doing it, I think it speaks toward just me wanting to not let that level drop off when he leaves,” Speaks said. “That really was my main focus last year was when he got out, I don’t want people to think there’s a difference. There’s not a difference because 9 and 5 is the same thing.”

Clogging running lanes and pushing the pocket are standard obectives for players on the interior, but it’s chasing the ball regardless of where it is on the field that Speaks called “the heart and soul of my game.” It’s how coaches explained a lot of Speaks’ stats from a season ago.

“Just always has a knack for the football,” Ole Miss defensive line coach Chris Kiffin said of Speaks. “If you look at the stat sheet, he probably finished around the same tackles if not more than Robert last year because he has a knack for getting to the ball. Rob was an exceptional athlete and made huge plays at big times for us, but Breeland really just has a knack for the position and a down-and-dirty mentality where he’s the kind of guy you want playing inside.”

Speaks has shed some weight to prepare for his increased role. As light as 280 pounds at one point, Speaks had put more than 10 pounds of that back on by the start of fall camp and said he wants to be at 295 by the time the season starts after carrying more than 300 pounds last season.

It’s part of his plan to be even more of a disruption for offenses this season.

“I want to do better than I did last year,” Speaks said. “Doing better is getting more sacks, getting more (tackles for loss), getting more tackles. Chasing the ball that much more and not being as tired. Just bettering myself in every area.”