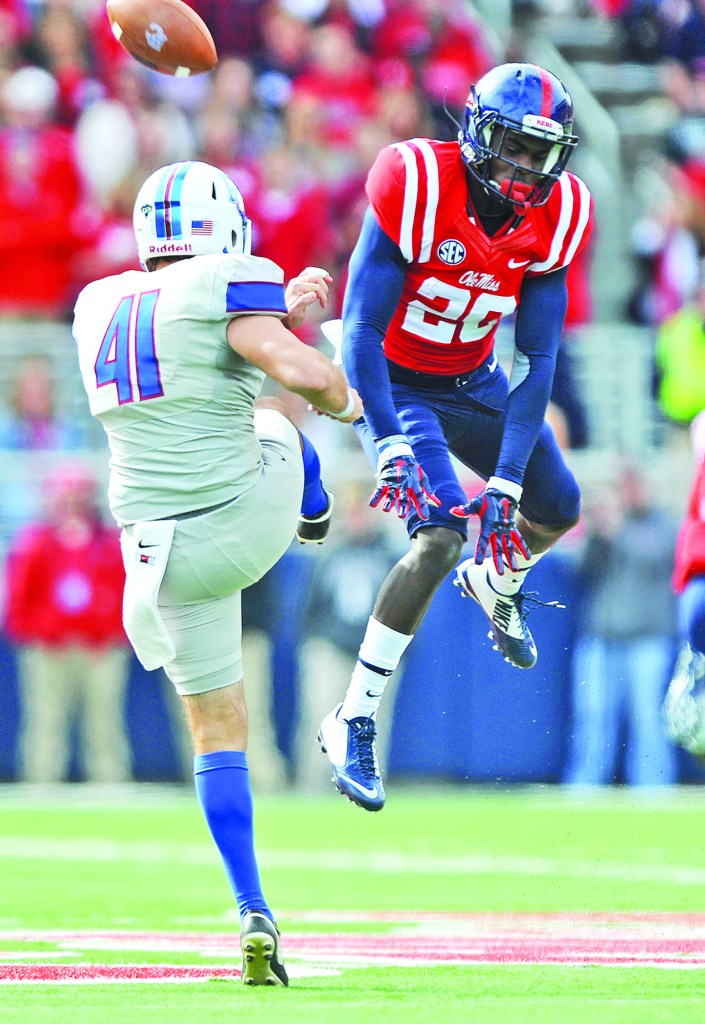 Ole Miss' C.J. Moore (26) will miss a significant amount of time after undergoing surgery on his right pectoral muscle on Monday. (Bruce Newman)

Ole Miss is down a safety.

C.J. Moore had surgery Monday on a torn pectoral muscle and is out indefinitely, Ole Miss coach Hugh Freeze confirmed Tuesday. Freeze wasn’t ready to say the injury will cost the junior his season, but it’s a blow to an already thin secondary with fall camp less than two weeks old.

“We’ll see how that rehab comes,” Freeze said. “Not ready to say how long that is. I don’t really know. He does have a redshirt year, so that will play into it, too, depending on what point of the season we’re in. We’ll do what’s best for the program and the kid when that time comes.”

The 5-foot11, 193-pound Moore played in every game last season as a backup, recording 19 tackles and two pass breakups, and is listed as freshman Myles Hartsfield’s backup at rover. Another true freshman, Jarrion Street, has moved over from running back to give the defense another body on the back end.

“It just hurts us in our depth,” Freeze said. “(Moore) was definitely in the two-deep. That’s something you never want to happen. It’s the constant struggle of how do you prepare your team for the opening game that we have, be physical, get things done and then try to keep as many healthy as you can.”

Sophomore Zedrick Woods is competing with C.J. Hampton at free safety with redshirt freshman Armani Linton also vying for snaps there. True freshmen Deontay Anderson and Greg Eisworth could also be a part of the rotation, though Eisworth is dealing with a hamstring injury.

A.J. Moore, C.J.’s twin brother, is the primary backup at Huskie to Tony Conner, who Freeze said is being limited to one practice when the Rebels have two-a-days as a precaution following two surgeries on his meniscus last season.

Time for comfort
Some of the children who lost both parents when Oxford residents Drs. Jason and Lea Farese, Dr. Michael and Kim Perry and Dr. Austin and Angie Poole were killed in a plane crash Sunday got an escape Tuesday by attending practice.

Freeze and several players took time to talk to the children, take pictures and run through drills with them. The couples were parents to 11 children in all.

Freeze said it was the least his team could do.

“Man, you search for answers, and you’re just at a total loss for words,” Freeze said. “I know the Oxford community though because I’ve lived here now for five years and three before, and I know that they will rally. I know we’re going to do our part in helping these young kids have a future that is secure, and I know their families will, too. We’re here to help. We’ve got all those kids here today from those families and see our guys hanging out with them right now. It hit home for sure.” 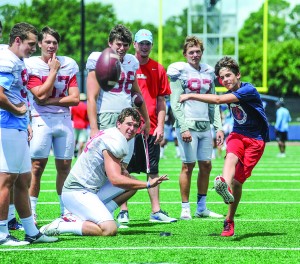 John West Perry, right, the son of the late Dr. Michael Perry and the late Kim Perry, kicks a field goal as Mississippi kicker Nathan Noble (91) holds at football practice on Tuesday. Ole Miss hosted the children of  the six people killed in a plane crash last Sunday in Tuscaloosa, Ala. (Bruce Newman)

First scrimmage
Ole Miss held its first scrimmage of camp Monday with an abnormally strong day coming from the offense this time of year, Freeze said.

“I thought (the offense) really controlled the scrimmage, which is not normal for this early in camp. I was real pleased with that side,” Freeze said. “Defensively we have a lot of things to clean up. That was a bit discouraging. We’ve got a lot of improving to do still on both sides, but I did think there were some neat things offensively (Monday).”

Metcalf  ‘continues to show up’
Former Oxford standout D.K. Metcalf is one of the freshmen who continues to impress, Freeze said. The 6-4 wideout already possesses the physicality that usually takes newcomers time to develop at the collegiate level.

“D.K. Metcalf continues to show up in one-on-one situations,” Freeze said. “He’s so big and strong for a freshman. He doesn’t have to win the route by a large margin to have a chance to have success.”

Other fresh faces who impressed in the scrimmage, Freeze said, are running back D’Vaughn Pennamon and Anderson, who pulled down a couple of red-zone interceptions.

“We need bigger safeties in this league,” Freeze said of Anderson. “He and Street look like two SEC safeties back there. There’s still a lot of things they’ve got to learn, so let’s not rush them. Let’s don’t project them to be there yet, but I sure like the way they look.”

Other injuries
Eisworth still hasn’t been cleared to practice while receiver Markell Pack, who suffered an injury to a thumb tendon last week, will have a pin put in his hand today, Freeze said.

Freeze said he’s been told by the medical staff Pack should return within the next 10 days, though nothing is guaranteed.

“I’m always hesistant to say when they’ll be back, but that’s what I am told,” he said.