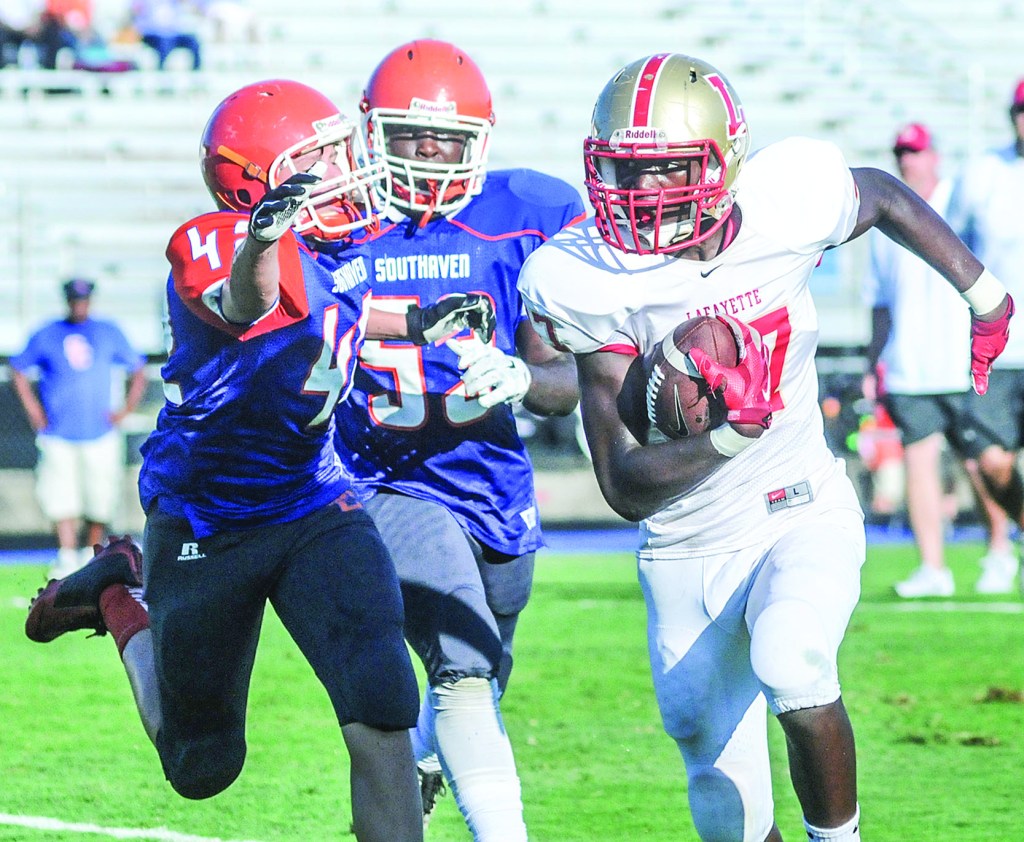 Junior running back Jamarcus Quarles (17) is part of a new-look backfield for Lafayette, which will begin a new era under head coach Michael Fair on Friday at home against Horn Lake. (Jake Thompson)

It is the same opponent the Lafayette High football team started last season with. Even most of the key players on both teams are back, but there is one new face that will be on the sideline.

First-year head coach Michael Fair officially begins his tenure with the Commodores as they take on Horn Lake in their season opener Friday night at William L. Buford Stadium. Kickoff is set for 7 p.m. and can be heard locally on 105.1 FM.

“Anxious is what I get,” Fair said of the emotions of starting a new season with a new team. “You’re ready to get it started. You wait all year for it, and it’s finally here. Just real anxious about it and can’t wait to see our guys play.”

Lafayette topped the Eagles, 34-7, to kick off the 2015 campaign at Horn Lake High School. Quarterback Will Ard threw for 169 yards and one touchdown while Tyrell Price rushed for 79 yards and three touchdowns on 14 carries.

Ard is back without Price but has a stable of running backs led by Jamarcus Quarles that’s ready to continue what their predecessor did to the Eagles a year ago.

On the other side, Horn Lake is without the quarterback who started the game last year in Kameron Coleman, who threw for 58 yards and zero touchdowns.

Coleman did not start many games after that, and Horn Lake does return its top producer at quarterback. Derrick Pointer II threw for nearly 1,400 yards and eight touchdowns in eight games played last year. He also threw nine interceptions.

The Eagles also return their top rusher. Peyton Logan is a senior this season and led Horn Lake with 1,234 yards and 10 touchdowns on 175 carries.

“We had film from last year, and a lot of those guys are returning,” Fair said. “I think (Logan) is a great player. Has a lot of speed and the guy that can score on any given play. We’ll have to wrap him up and team tackle as they say and rally to the ball. He’s a dynamic player.”

Coleman was the Eagles’ top receiver with 839 yards and seven touchdowns on 56 receptions last season, but Horn Lake still has two of its top three wide outs returning. Logan followed Coleman with 512 yards and three touchdowns through the air while junior Kyvantae Boykins had 186 yards and one touchdown reception as a sophomore.

Elevated competition
Lafayette fell to Southaven, 14-0, in a two-quarter jamboree game last week. The Commodores follow that up with another school that is two classifications above them. Six quarters combined against two Class 6A schools will give Fair a good indication of how his team will be heading into an open date next week before tackling Grenada and crosstown rival Oxford.

“You can’t replicate what happens during a game in practice. You try to, but you can’t,” Fair said. “Going from one 6A team to another, they just have so many numbers. Our non-district games are built in a way that if we can be successful in these games, it will really prepare us for our district games.”