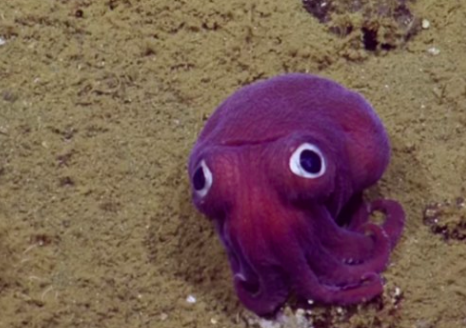 The Googly-eyed stubby squid was found in the Pacific.

LOS ANGELES (AP) — A team of scientists and technicians scanning the rocky ocean floor off Southern California couldn’t contain their excitement when they spotted a bright-purple, googly-eyed stubby squid.

They let out a collective “whoa” on video posted on Facebook as a camera on a remote-operated vehicle came across the cephalopod closely related to a cuttlefish.

Then the jokes started. One suggested it resembled a child’s dropped toy, another said the creature’s eyes appeared to be painted on.

The team is part of a four-month Ocean Exploration Trust expedition to map fault zones and understand ecosystems around them.

The find could be more than just bemusing. Cephalopod expert Michael Vecchione of the Smithsonian Institution suggested the creature could be a new species but said the question can’t be answered because that particular stubby squid remains deep in the ocean.