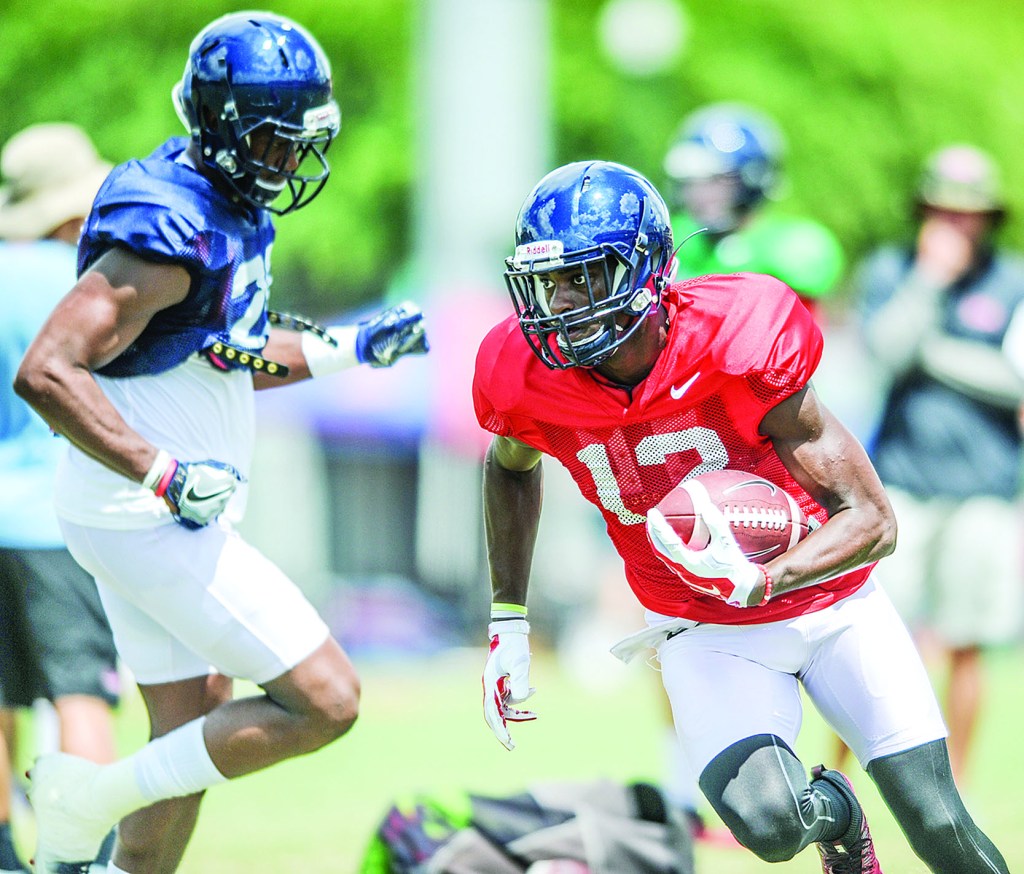 After a redshirt year he didn’t expect, Ole Miss receiver Van Jefferson (12) is primed to make a significant impact this fall. (Bruce Newman)

Van Jefferson is where he wants to be, even if it is a year later than he expected.

Ole Miss’ freshman wideout used a strong spring to vault himself to the top of the depth chart and has spent most of fall camp running with the first-team offense. Yet Jefferson doesn’t exactly feel like he’s sewn up a starting spot in the slot competing with junior Markell Pack, who’s been limited with a thumb injury.

“You know we don’t look at it that way,” Jefferson said. “We go out and compete every day, so I don’t get into any of that. I just go out there and play, getting ready for Florida State.”

A four-star prospect in last year’s recruiting class, Jefferson was counting on making an immediate impact last season with an advanced knowledge of the game and more polished route-running than most young receivers having been tutored by his father, longtime NFL assistant and Miami Dolphins receivers coach Shawn Jefferson. But with the Rebels’ depth at the position, Jefferson decided to redshirt.

Jefferson admitted having to sit and watch made him “pretty upset,” but it did come with some benefits. He used the year to get acclimated to the playbook, add some bulk to his 6-foot-2 frame — he’s up to 187 pounds after arriving on campus last summer at 170 — and refine his technique.

“At a certain point I did (realize it could help),” Jefferson said. “I talked to my mom and my dad. My mom was telling me to be patient, this is God’s plan for you. Just wait for it, and that’s what I did. Now it’s all working for the better.”

Coached up
Damore’ea Stringfellow and Quincy Adeboyejo are still around, too, but when it comes to having a knack for getting open, Ole Miss coach Hugh Freeze said there’s nobody better at the position than his second-year freshman.

“He’s the best route runner we have as far as getting in and out of breaks, and his hands are very, very steady,” Freeze said of Jefferson. “He’s got adequate speed to stretch the field. In tight quarters, when he gets out of a break, his separation is as good as any I’ve coached here. That’s his gift. You can tell he’s been coached.”

Jefferson credited that gift to the help of his father, who enjoyed a 13-year NFL career as a receiver before he started coaching in the league in 2005.

“You’ve got to have some quick feet,” Jefferson said. “My dad instilled that in me. So having him as a mentor and teaching me those things, I owe that to him. And with that, you just got to rep it, rep it, rep it and eventually it will click.”

Said Freeze, “He understands the spacing, understands when to tone the route down and when to speed through a zone. He kind of just has a feel for it.”

Jefferson came in with another highly touted receiver in DaMarkus Lodge, who opted to play last season but had just one catch, a 12-yard touchdown in a season-opening rout of Tennessee-Martin. Lodge joins Jefferson in the two-deep this fall, and both are ready to put their games on full display.

“This year, he’s ready to ball,” Jefferson said. “He’s ready to get out there and make some plays. We both are going to be out there making some noise.”