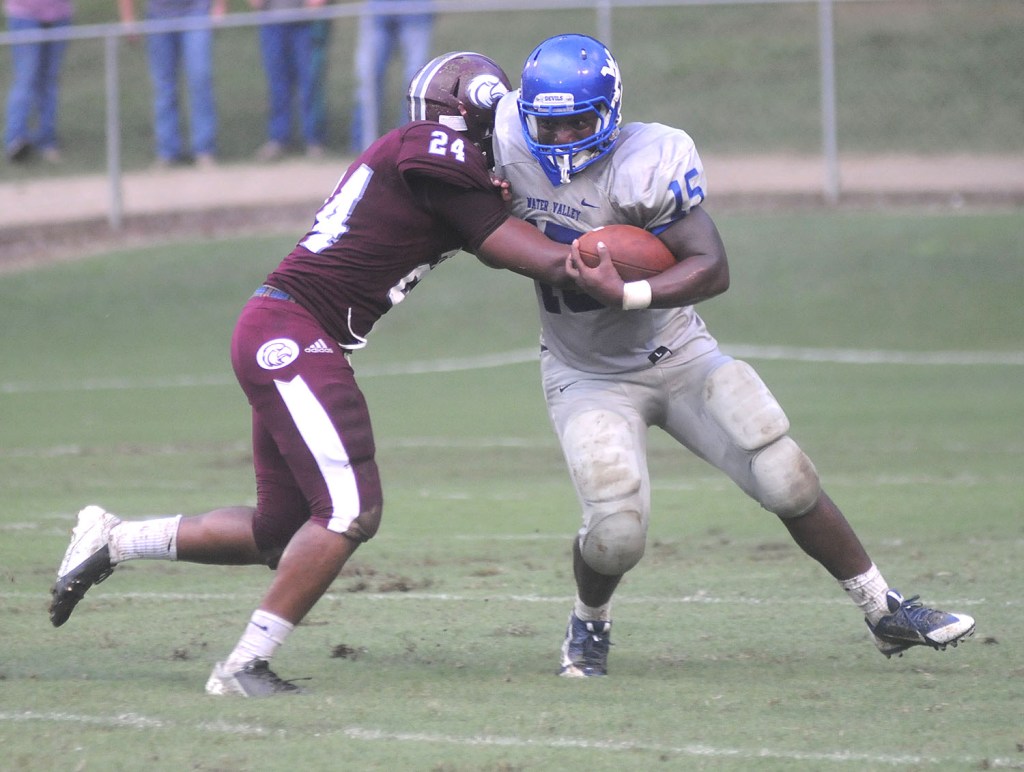 EUPORA — Brad Embry knew his team was young and for the most part inexperienced. The Water Valley football head coach found out just how much on Friday night.

The Blue Devils dropped their season opener, 42-27, to Eupora, losing to the Eagles for the second straight year.

“(Eupora) is a veteran, good football team and we are not,” Embry said. “We’ll decide if we are by the way we prepare. We practiced OK this week. I was real concerned playing a team like Eupora how we would play for four quarters. … That’s a big hurdle to overcome to think you’re practicing good and you’re not.”

After a small rain shower passed through the area, the sun poked out for the remainder of the evening and there were also bright spots in Water Valley’s play on the field. Getting around hiccups on the first two possessions of junior quarterback Ty Varner tossing an interception and fumbling the ball, the Blue Devils’ offense started clicking, mostly on the ground.

Once Eupora (1-0) got on the board first with a 1-yard touchdown run by quarterback Edwin Herard followed by a missed extra point for the early 6-0 lead, the momentum shifted.

The Blue Devils (0-1) used a 13-play drive capped by a 1-yard touchdown run of their own by running back Taghee James to answer and take a 7-6 lead after a made extra point by Joseph Washington. On the following drive, cornerback Martavious Rockette ran an interception back 35 yards, setting up what would be a 7-yard touchdown run by James.

The Blue Devils capitalized on another Eupora mistake, this time a fumble by Herard, and grabbed a commanding 21-6 lead late in the first half after a 23-yard touchdown run by Trenderrious Brock.

“(I saw) we have a little bit of athleticism, but we’re just not a real good team right now,” Embry said.

Varner finished the game 5-for-15 for 58 yards with the one interception and fumble.

Eupora proved to not be ready to roll over for the Blue Devils. In fact, the Eagles were ready to take the momentum — and the game — into their own hands.

On back-to-back possessions to close out the first half, Eupora scored on a 2-yard run by Al Dumas and a 14-yard pass by Herard to Kylan Shaw. The Eagles converted both two-point conversions and used a 16-0 run to take a 22-21 lead into halftime.

The momentum continued into the second half as Eupora scored 36 unanswered points and led Water Valley 42-21 heading into the fourth quarter.

“We’ve got to learn to be mentally tough,” Embry said. “Being mentally and physically prepared to play the game for four quarters. … (Eupora) has a really good scheme. We made adjustments, and they countered. That consistent pounding 3, 4 yards turned into 6, 7 and 8 yards.”

Late in the third quarter, James took a hard shot and had to come out of the game. Embry said the initial prognosis was a bruised sternum, and James stayed out the remainder of the game and had an ice bag taped to his chest. He finished the night rushing for 37 yards and two touchdowns on 11 carries to go with one catch for 14 yards.

Brock became the primary rusher the rest of the night, scoring a 5-yard touchdown with four minutes left in the game to end Water Valley’s scoring drought that started before halftime. Brock’s night ended as the team’s leading rusher with 93 yards and two touchdowns on 14 carries. He also had two catches for 15 yards.

Water Valley continues its opening road trip next week when the Blue Devils head south on Highway 7 to Coffeeville for the annual Railroad Rivalry game.