‘Next man up’ for Ole Miss at running back 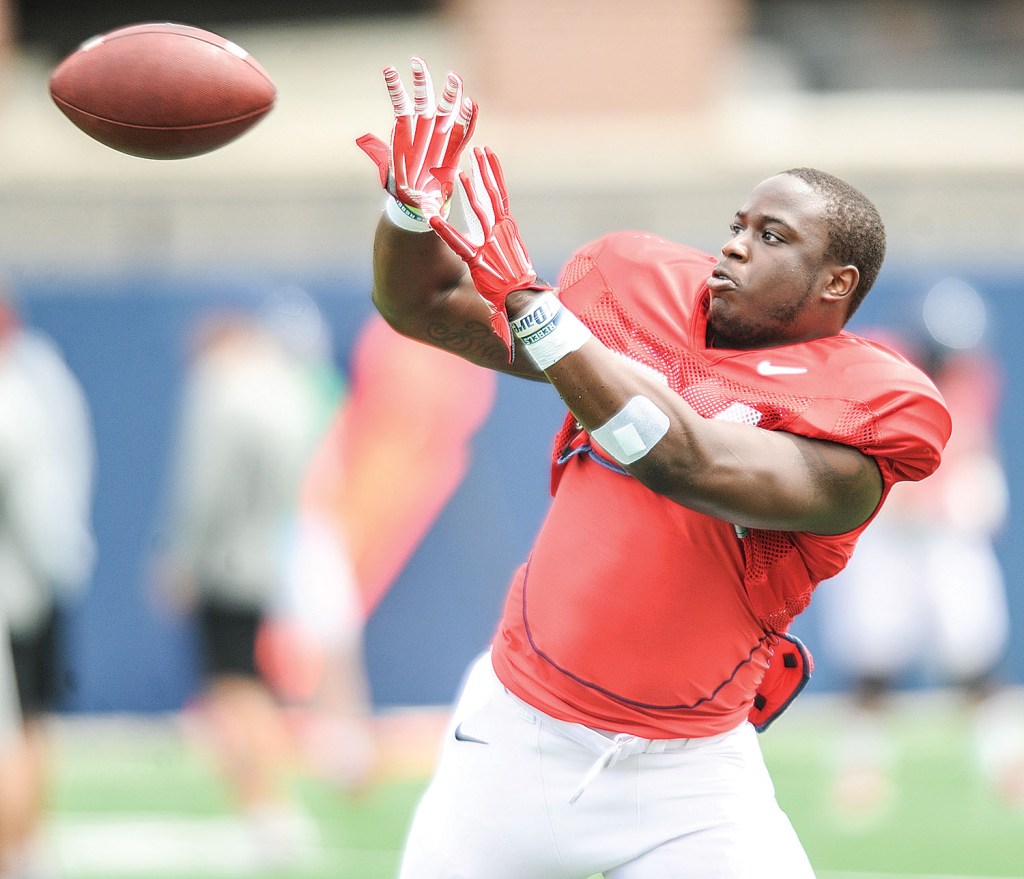 Ole Miss running back Eric Swinney makes a catch during a drill at practice in Oxford on Saturday. (Bruce Newman)

Ole Miss would like to have its full cast of running backs this fall, but that won’t happen after the school announced Jordan Wilkins is academically ineligible for the regular season.

In a statement released Thursday, the athletics department cited an administrative error as the reason Wilkins, a fourth-year junior, came up short of the required credits to be eligible. NCAA bylaws require student-athletes entering their fourth year of enrollment to have at least 60 percent of the coursework toward their degree completed.

Wilkins’ experience will be missed, coaches and teammates said, but the Rebels are moving on with what they’ve got.

“It’s the next man up,” offensive coordinator Dan Werner said following Saturday’s practice. “Just like if there’s an injury or something, we’re going to put the next guy in. We’ve got a bunch of talent at that position, so the next guy knows he’s got to come on and compete.”

Wilkins’ absence leaves senior Akeem Judd and redshirt freshman Eric Swinney as the primary options in the backfield. Judd’s 421 yards and 5.5 yards a carry last season are the most among returning backs while the 5-foot-10, 210-pound Swinney is healthy after sitting out last season recovering from a stress fracture and used a strong spring to vault toward the top of the depth chart even when Wilkins was available.

Junior Eugene Brazley is also back, though he’s been used mostly as a reserve with just 11 career carries.

“All those guys have played a bunch of football other than Swinney, but Swinney picks it up fast and he’s real physical,” Werner said. “He’s going to be a good one back there.”

The depletion could also create a role for true freshman D’Vaughn Pennamon, who has impressed with his physicality during camp. The 5-11, 218-pound Pennamon took snaps with the second-team offense during team periods Saturday.

“Big and physical,” quarterback Chad Kelly said of the young backs. “They understand the game very well. … I think they’re just really, really good players overall. They’ve got the speed, and they’ve got the athletic ability to make plays. That’s what we’re asking them to do.”

Wilkins, a recreation administration major, could possibly return for the postseason should Ole Miss get there if he shows enough progress toward his degree in the fall. He participated in Saturday’s practice primarily as a kick returner.

“We’re playing this year for him to get back,” Kelly said. “It is what it is what happened. We’re anxious to hopefully get to the playoffs and be able to let him play this season.”

Ole Miss is rotating plenty of offensive linemen among the first-, second- and third-team offenses. Most of that shuffling is coming at left tackle as the Rebels continue to look for Laremy Tunsil’s replacement.

Rod Taylor spent most of Saturday repping with the first-team offense there while true freshman Greg Little ran with the second team. Redshirt freshman Alex Givens is also competing for the job with Jeremy Liggins still not practicing because of a violation of team standards.

“We’re moving guys around a little bit just to see who’s going to fit where, but we’ve got to come up with about eight to 10 guys that we feel like can go through a game,” Werner said. “Right now, guys are really battling.”

Ole Miss will hold its second scrimmage of camp Sunday.

Defensive coordinator Dave Wommack said he’ll be evaluating the defensive line, particularly some of the young ends with Fadol Brown’s surgically repaired foot still sidelining him. Wommack didn’t rule out moving some interior players to the outside depending on what he sees.

“We’re doing all the right things right now,” Wommack said. “Got the big scrimmage tomorrow, and we’ll kind make some decisions after that.”

As for the offense, Kelly said the objective is simple.

“Just trying to lead my team down to score. That’s what it’s all about,” Kelly said. “Just executing the offense to perfection. That’s your goal every time you step out onto the field. Go out there, complete every ball and have no turnovers.”