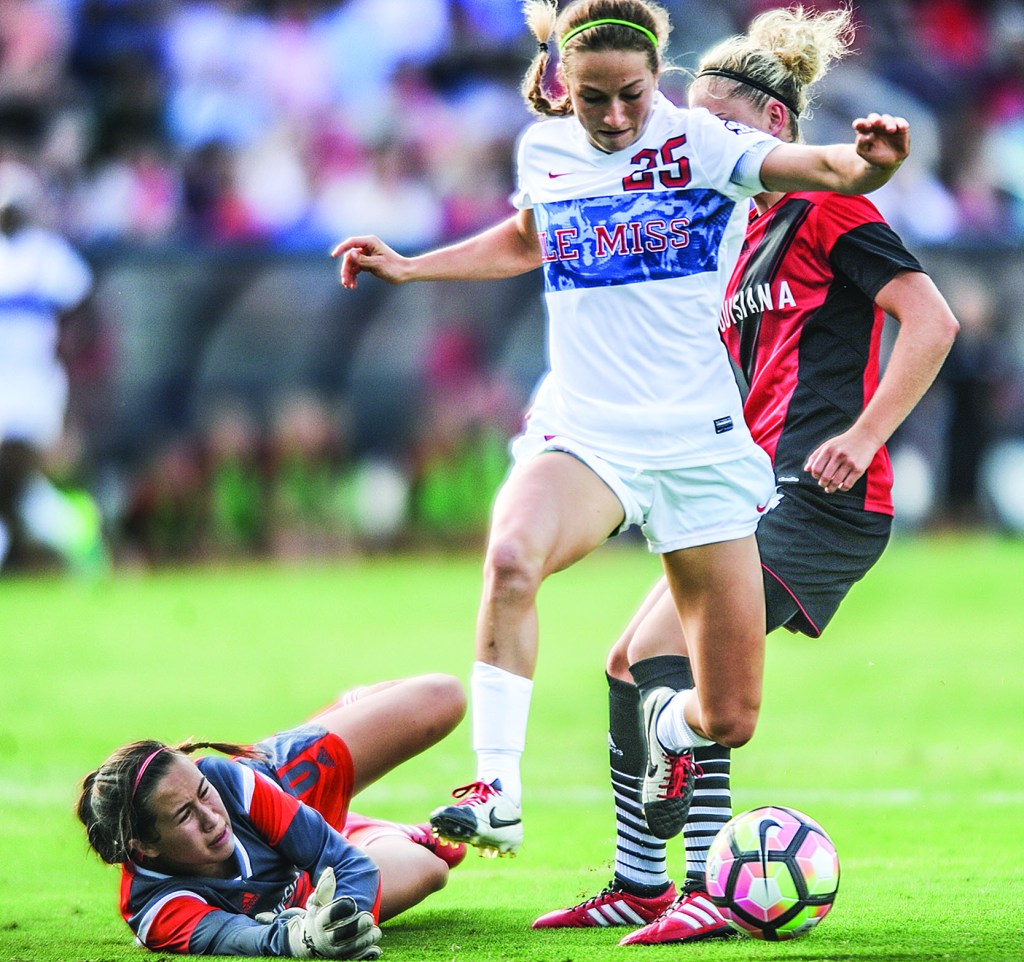 Ole Miss’ Addie Forbus (25) gets past Louisiana-Lafayette goalkeeper Mackenzie Lee (0) and Celine Rumpf (4) to score the first goal of the match at the Ole Miss Soccer Stadium on Friday. The Rebels won 3-0. (Bruce Newman)

No. 22 Ole Miss soccer dominated in its season opener, claiming a 3-0 win over Louisiana-Lafayette Friday night at the Ole Miss Soccer Stadium.

The Rebels (1-0), much like last season, jumped out early with a goal within the first minute, amplifying the eighth-largest crowd in school history of 1,335 for the remainder of the full time.

Senior Addie Forbus looked to be in midseason form, firing off two goals in the first game of her final campaign as a Rebel, and junior Bella Fiorenzo scored the third goal in the 36th minute to cap the scoring.

The Rebel backline held strong all 90 minutes, only allowing four Ragin’ Cajun shots, while putting up 15 of their own, nine of which were on target.

Forbus’ first strike came just 42 seconds in, as she found space on the far corner, broke around the UL keeper and fired one in for the first score of the season.

Just 14 minutes later, she netted her second of the night, this time off an assist from CeCe Kizer, which gave the home Rebels an early 2-0 advantage.

Fiorenzo, who subbed in early in the match, joined in on the scoring in the 36th minute when senior Mackenze Parma fed her the assist putting the Rebels on top 3-0.

Kizer put up three shots of her own, two of which were on target, while senior Gretchen Harknett was also active with two shots on goal. Liza Harbin had a header in the second half that was just high and over the net, as 17 total players saw action in the victory.

Ole Miss’ all-time record in season openers moves to 14-5-3, and the Rebels also remain unbeaten all-time against Louisiana-Lafayette, holding a 5-0 advantage in the series.

The Rebels continue opening weekend of play tonight at 7 against Northwestern State at the Ole Miss Soccer Stadium.