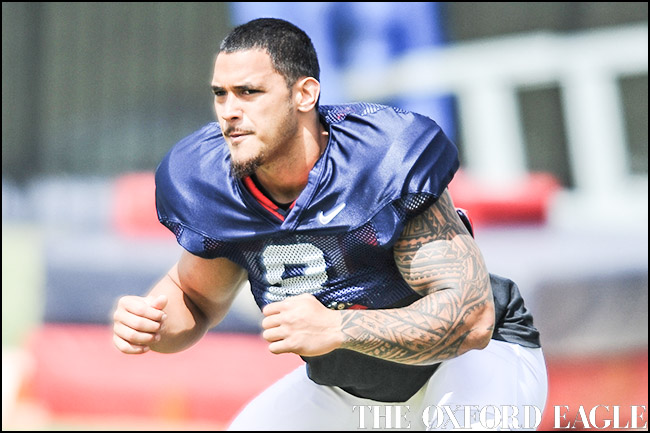 Ole Miss brought in Rommel Mageo to be an instant contributor at linebacker, but the Oregon State transfer is still learning the nuances of the Rebels’ defense after arriving on campus earlier this summer. (Bruce Newman)

DeMarquis Gates is prepared to play in the middle this season, but Ole Miss defensive coordinator Dave Wommack would like to move his most versatile linebacker to the outside.

Whether Wommack will be afforded that luxury likely hinges on how the Rebels’ newest linebackers progress over the next two weeks.

Rommel Mageo and Detric Bing-Dukes both transferred to Ole Miss with the idea of offering immediate help at the position with C.J. Johnson and Denzel Nkemdiche no longer around, but the newcomers are having to think as much as they’re reacting as they try to rapidly learn the intricacies and terminology of a new defense with the Labor Day opener against Florida State quickly approaching.

“They’re not cutting it loose like I want them to yet because they’re feeling things and learning the defense,” Wommack said. “I think they’ll be real physical players when we get to that point and play those types of teams.”

While the two have been in their new practice uniforms less than a month, they’re already among the Rebels’ most experienced linebackers at the collegiate level.

A graduate transfer from Oregon State, the 6-foot-2, 233-pound Mageo started the previous two seasons for the Beavers and led the team with 87 tackles a season ago. Head coach Hugh Freeze said he’s been impressed with Mageo’s desire to put in the work to get acclimated to his new playbook, referring to Mageo as a “football junkie.”

Teammates have taken notice, too.

“I’ve never seen anyone just pick up our defense, especially so fast, just because we have such a complex defense and we run so many fronts and coverages,” said fellow linebacker Terry Caldwell, who’s taking first-team reps at the outside, or stinger, position entering his second year in the program. “With him picking it up that fast, it really says a lot and really says he really wants to come in and play. He’s trying to make the defense help out our team.”

Bing-Dukes has a similar build at 6-1 and 247 pounds, a frame he used to record 76 tackles at Iowa Western Community College last season. A four-star prospect coming out of high school who originally signed with Georgia, Bing-Dukes also flashed his athleticism with a 98-yard interception return for a touchdown.

“I think both are very similar,” Freeze said. “They want to learn. They want to know what to do.”

Gates has spent his first two seasons at stinger and made all four of his starts there a season ago, the most of any returning linebacker, but Wommack began training Gates in the middle this spring just in case. Gates is the starter there for now, but having Mageo or Bing-Dukes emerge to where Wommack could bump the speedy, rangy Gates back to his more natural spot on the outside would be ideal for more reasons than one.

“In a perfect world, I’d probably rather have (Gates) at stinger, but he is totally ready to play mike linebacker, too,” Wommack said. “I think it depends on what type of offense we’re playing will dictate where he’ll play that week. Provides us with a little more depth if he’s at stinger.”

Can the duo come on enough between now and the showdown with the Seminoles to make that feasible? What’s their comfort level with the defense, and in what areas do they still have some catching up to do?

Neither can answer those questions for themselves during fall camp as Ole Miss has tentative plans to not make transfers and early enrollees available for interviews until after the first game, but they’re at least headed in the right direction at a position that needs it.

“They’re progressing,” Wommack said. “It just all starts to run together for them a little bit. I’m not disappointed in them. I just know if the games started tomorrow who would be the starters.”