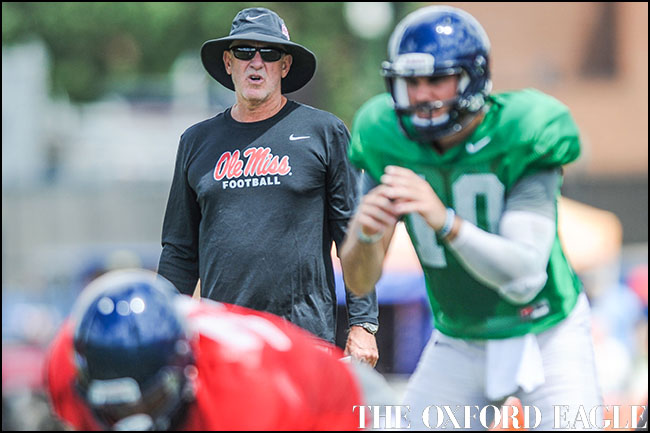 The question was posed to offensive coordinator Dan Werner over the weekend: what area among the group needs the most work?

Werner instead looked at the bigger picture.

“Right now, we’re just trying to become a great offense,” Werner said. “We’ve got to work on everything.”

Fine-tuning might be the best way to put it for an offense that’s aiming to duplicate last year’s record-setting numbers if not surpass them. Ole Miss set 14 single-season school records in the program’s first 10-win season since 2003, including total yards (6,731), points (531), first downs (341) and touchdowns (68).

The Rebels lost four starters on that side of the ball to the NFL Draft, including first-rounders Laremy Tunsil and Laquon Treadwell, but they have the Southeastern Conference’s best quarterback back in Chad Kelly and a handful of linemen who started multiple games last season while recruiting has kept the Rebels deep at running back and receiver.

Young help
Some of that backfield depth took a hit with Jordan Wilkins recently being declared academically ineligible for the season, but redshirt freshman Eric Swinney will get his shot alongside senior Akeem Judd. Redshirt freshman receiver Van Jefferson will take over in the slot with Quincy Adeboyejo moving outside opposite Damore’ea Stringfellow, and true freshmen A.J. Brown, D.K. Metcalf and Tre Nixon may be too talented to keep out of the rotation.

The competition to replace Tunsil at left tackle is still going among Rod Taylor, Alex Givens and true freshman Greg Little, a five-star signee who ran with the second-team offense Saturday.

“With the success we had last year and some of those guys leaving, the younger guys I think sort of took it upon themselves to say, ‘Look, I’ve got to step up to make this thing right,’” Werner said.

“So far, it seems like they’ve worked really hard in the offseason with the strength coaches, coach (Paul) Jackson. They’ve done a great job, they’re in great shape and they’re locked in mentally.”

Kelly will again facilitate it all after becoming just the third player in Southeastern Conference history to throw for at least 4,000 yards in a season. The senior said he’s comfortable enough with the offense that he could call his own plays in a hurry-up situation if needed with a few tweaks here and there being the focus now that camp is more than two weeks old.

“We’re putting in a lot of option routes in the last couple of weeks,” Kelly said. “We’re kind of just getting more familiar with those and kind of being on the same page. … We’re out here working every single day to get better and get on the same page.”