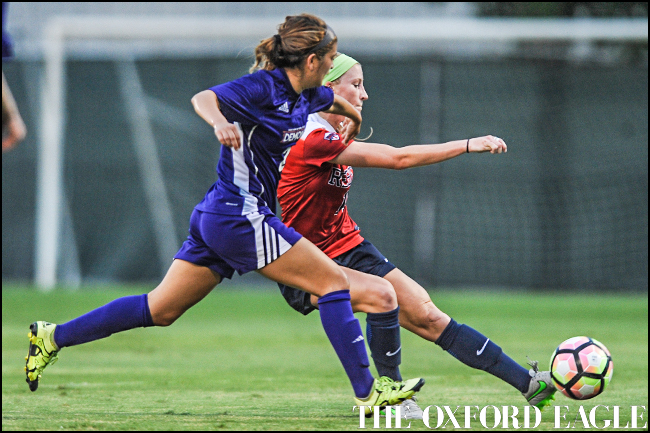 Ole Miss' Gretchen Harknett (14) kicks the ball past Northwestern State's Amy Renteria (2) to score in the first half at the Ole Miss Soccer Stadium on Sunday. The Rebels won 3-0. (Bruce Newman)

The Rebels (2-0) pressured the Lady Demons (1-1) time after time with a whopping 31 shots, the most in a single game since Aug. 31, 2012 (Little Rock). Sixteen of those were on target, keeping the Northwestern State goalkeeper on her toes for the full 90 minutes.

Senior Addie Forbus, who began the 2016 campaign with a couple of scores in Friday’s victory, kept it rolling Sunday with two more goals quickly putting her at four on the season. The Amory, Mississippi native has now moved into a tie for eighth all-time on the career goals list with 28.

Fellow senior Gretchen Harknett also joined in on the scoring with her first goal of the season as the Rebels have outscored their opponents 6-0 in the first two matches of the young season.

After the two sides played 17 minutes of scoreless action, Harknett broke the tie at the 18:14 mark putting Ole Miss in front, 1-0. Georgia Russell sent her a cross into the far side, when she broke left, and touched with her left foot punching it in to the right back corner.

That score would hold for the remainder of the opening half up until the 63rd minute when Forbus increased the home team’s lead. At the 63:13 mark, freshman Gabby Little pushed across an assist to Forbus from the far side, resulting in a quick score for the senior from around the 6-yard box.

Forbus’ second score came with just five minutes to play, when she powered one from near 30 yards out going right through the hands of the keeper extending the advantage to 3-0.

In all, 10 different Rebels put up at least one shot led by 10 from Harknett, seven of which were on target. Forbus put five on goal of her seven total, while CeCe Kizer also had five, one of which was on target.

In goal, Marnie Merritt played the full 90 minutes and recorded her second-straight clean sheet to begin the season with three saves on the night. On the opposite side, Northwestern State’s Alex Latham was busy throughout the contest with 13 saves to her credit.

Ole Miss continues its four-game homestand next weekend with Friday action against Memphis (7 p.m.), and a Sunday night matchup versus Lipscomb (6 p.m.).