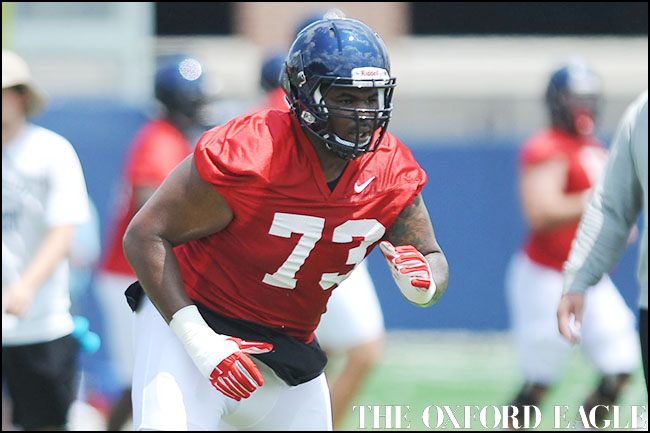 Ole Miss' Rod Taylor has emerged as the frontrunner to take over at left tackle. (Bruce Newman)

Rod Taylor has begun taking repetitions with the first-team offense at left tackle in the practices open to the media for viewing while true freshman Greg Little is running there with the second team.

It hasn’t been just for show.

“Just an athletic guy that playing tackle is a little new for him, but he’s got the athletic ability and gives us a chance against the type of ends we’re going to play early on,” Freeze said.

Taylor spent his first two seasons at guard before being moved outside before fall camp started. The 6-foot-3, 329-pounder’s body type profiles more as an interior player, but Freeze said Taylor has the footwork to make up for it.

“You’ve got to have great feet to play against these speed rushers that you have out there, and he’s got some girth for the power rusher,” Freeze said. “You’d love for him to be longer, but I’ll take his feet over that.”

As for Little, Freeze said the five-star signee who’s already been dubbed by many as Tunsil’s eventual successor is coming along.

“It’s unfortunate that a lot of people want to compare him to Laremy Tunsil as a junior,” Freeze said. “Laremy didn’t start I believe until Game 4 of his freshman year. Greg is going to be a really good player. Things are moving real fast for him and he’s got to play the game a little faster, but he’s everything we thought he would be.”

Freeze addressed running back Jordan Wilkins’ academic ineligibility Tuesday, something he said he didn’t know about until “this summer sometime.”

In a statement released last week, the athletics department cited an administrative error that left Wilkins short of the credits needed to be eligible. Freeze didn’t elaborate, only saying it can’t happen again.

“This should never happen. It’s unfortunate,” Freeze said. “Really proud of the way Jordan has handled it and really thought that the appeal would be granted based upon the circumstances, but life’s not fair all the time.”

Defensive end Fadol Brown is still sidelined as he recovers from surgery on his fractured foot, and it may be a matter of pain tolerance this season for the senior, Freeze said.

“I’m not sure how that’s going to play out,” Freeze said. “We’ve got one more treatment that I think they’re attempting to try to get done this week.”

Freshman safety Deontay Anderson fractured a bone in his hand during Sunday’s scrimmage. He may have to wear a cast, but Freeze said he isn’t expected to miss any time.

Freeze said Taylor and Breeland Speaks have done “everything I’ve asked” following their offseason arrests for misdemeanor shoplifting and first-offense DUI, respectively, and are in line to play against Florida State. … Freeze said he’s been “really pleased” with the camp performance of receiver DaMarkus Lodge, who caught just one pass as a true freshman last season. … Oregon State transfer Rommel Mageo is running with the second team at middle linebacker as he continues to learn the defense. … It’s too early to make any decisions about potential redshirts for true freshmen, Freeze said.