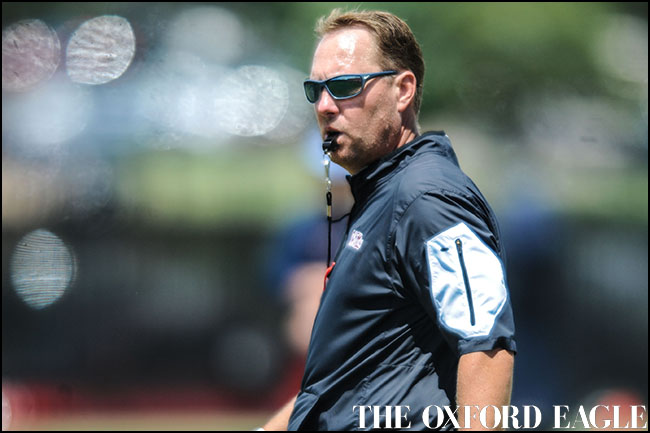 Whether it was the grind of fall camp, the start of classes looming or something else, Ole Miss’ latest scrimmage didn’t meet expectations.

The Rebels split into teams and went at it Sunday, but head coach Hugh Freeze said it wasn’t one of his team’s better days. The second scrimmage of camp, which was held a day before the fall semester began, left a lot to be desired with Freeze citing penalties and a lack of mental sharpness as the crux of the problem.

“We’ve got a ways to go,” Freeze said Tuesday. “We were not where I’d hoped we would be after that scrimmage. I do think some of it does have to do with I probably could’ve scheduled that second week a little differently and maybe they had been a little more mentally fresh. There were too many penalties, too many missed assignments, mostly defensively.”

Freeze had more positive things to say about the offense with quarterback Chad Kelly back at the controls as the group produced its usual handful of big plays, but the defense did its part to help with a number of missed tackles. Ole Miss has once again limited the full-scale tackling during camp to try to get to the Labor Day opener against Florida State as healthy as possible.

Still, Freeze said his team has tackled “quite a bit” through the first two weeks, which is making the whiffs a growing concern.

“I think the read is when you do (tackle), how do you do it?” Freeze said. “When we have, we haven’t been great at it. Is that because our receivers and backs are making really good moves or is it that we’re poor at tackling?

Growing pains
Kelly and his receivers are also picking on a retooled secondary with five freshmen and sophomores in the two-deep. Four of those are at safety with sophomore Zedrick Woods pushing C.J.

Hampton at free safety, true freshman Myles Hartsfield in line to start at rover and Deontay Anderson, another true freshman, running with the second team.

“Our offense likes to create (big plays), and certainly defensively you can’t give up those. We’ve given up too many in the first two weeks,” Freeze said. “We are very young back there. I forget how young we are sometimes. We’re playing a lot of young kids on the back end of our defense right now.”

Some of the upperclassmen on the back end are trying to get back in the flow of things, too. Nickel corner Tony Conner continues to rehab his surgically repaired meniscus and may have to wear a brace on his right knee all season, but the senior’s practice reps have only been limited on two-a-days.

But Conner said the physical part of the game isn’t what is holding the group back regardless of anyone’s experience level.

Freeze was upbeat about the fact that all of the Rebels’ shortcomings are correctable, but Ole Miss has to get them fixed in a hurry.

“I still love our attitude, but I’m just telling you where we’re at at that mark for that scrimmage on Sunday,” Freeze said. “I had hoped for more. The great thing is we still have two weeks to correct the mistakes that we made.”