Threat made to Oxford High School was sent via text message 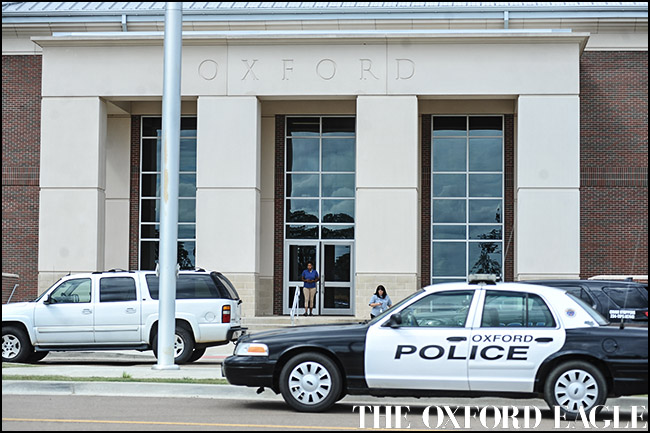 Bruce Newman An Oxford Police patrol vehicle is parked outside Oxford High School on Friday, Aug. 19, after a threat was received at the school.

A threat directed at Oxford schools Friday came as a text message, according to Oxford School District Superintendent Brian Harvey.

A threatening text message was received by an assistant principal of Oxford High School, although the text did not target a particular individual, Harvey said Monday at the OSD board meeting.

“The threat said something would happen after school was dismissed,” Harvey said. “It was fairly unspecific in nature.”

Harvey did not state what the message said, only that it was of a threatening nature.

After the text message was received, all district schools were put on lockdown for about 30 minutes toward the end of the school day. Students were dismissed close to their regular time; although parents picking up their children had to wait about 20 minutes longer than usual. All students were removed from the campuses for the remainder of the day.

Harvey said the district is working with the FBI to help track down the person who sent the text message, but that doing so will be very difficult, if not impossible. Harvey said the text was likely sent from a computer, rather than an actual cell phone.

“The cell phone number the text came from doesn’t exist,” Harvey said. “They used some type of proxy server.”

Harvey said the school district will continue to work with law enforcement and commended the schools for their prompt and orderly response.