The latest forecast update for the storm currently called “invest 99L” by the National Hurricane Center shows little more than thunderstorms and disorganization. But don’t put your guard down just yet if you live along the Gulf Coast, and in Florida.

Invest 99L may become Hurricane Hermine that threatens the Gulf Coast next week. Forecasters are watching this possibility with increasing concern. With Labor Day, a popular beach weekend approaching, all eyes are on invest 99L and the path it will take.

Wednesday’s NHC forecast reveals a 80 percent chance of tropical cyclone formation within five days for 99L and its path forecast projects the storm striking Florida, right around the Miami area. The path could have a wide variance, however. The Weather Channel suggests today, though, that Hermine could get pushed into the Gulf of Mexico where warm waters could fuel the storm, posing a threat potentially into Labor Day weekend for Mississippi, Alabama, Florida and Texas.

“…this system, in whatever form it’s in, should arrive in the southeast or central Bahamas by Friday or Saturday,” weather.com reports. “Once it reaches this area, the environment may feature low-enough wind shear and sufficient moisture to allow a tropical depression or storm to finally form, if it hadn’t done so already.

“By this time, upper-level high pressure should be established over the southern Appalachians eastward to the coast of Virginia and North Carolina.

“This steering flow could, then, push our system (T.D. Eight or “Hermine”) toward Florida later in the weekend or early next week. With that upper-level high in place, this system could then get pushed into the Gulf of Mexico, with the potential for a second landfall somewhere along the Gulf Coast next week, possibly as a strong hurricane.

“This ‘second landfall as a Gulf Coast hurricane’ scenario has been an increasing, important trend among multiple ensemble models over the past day or so.”

The NHC advises Wednesday morning that residents of Florida and the northwestern Bahamas should monitor the progress of this storm. Conditions are expected to become more conducive to tropical storm development in coming days. If invest 99L were to be named it would become Tropical Storm Hermine or Hurricane Hermine.

“Although environmental conditions are currently only marginally conducive for additional development, this system could become a tropical depression at any time during the next few days,” the NHC said this morning.

“Behind the scenes, meteorologists have sprung into action, downing extra cups of coffee, sending cryptic tweets and encouraging caution. The National Oceanic and Atmospheric Administration, the parent organization of the National Weather Service, has dispatched an Air Force Reserve ‘hurricane hunter’ aircraft to fly through the storm and gather additional data,” reports the news site fivethirtyeight.com. 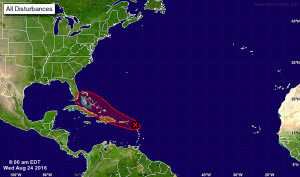 Invest 99L could become Tropical Storm or Hurricane Hermine. Florida and the Gulf Coast is in the storm’s path according to the latest forecast.