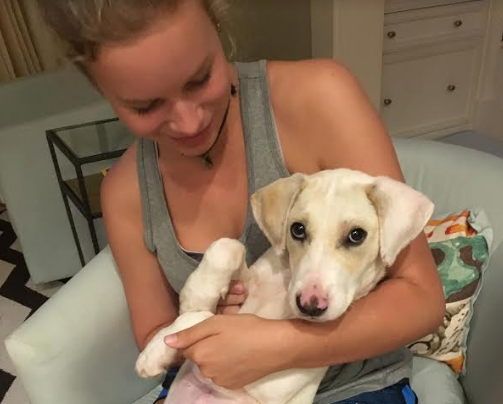 Annabel Terry and Frazier, a good dog looking for a good home.

Don’t feel too bad for Frazier.

He has a good dog heart and a forgiving soul. A new, caring home will make everything right for him in the long run.

Feel bad for his former owner, the one who discarded the puppy by leaving him chained to a fence in rural Lafayette County with no food and water to die in the searing summer heat.

Feel bad that this person cared so little for the animal they left him tethered to that fence with a chain that cut like a razor-sharp knife, searing the dog’s neck with a filet-like cut.

Thank goodness most people have bigger hearts, so when a passerby out for a bicycle ride  saw the dog in distress, they quickly found help.

The deep gash in Frazier’s neck that looked like it was sliced with a sharp steak knife should have killed him, of course. But the Frazier was sewn up just-in-time by a local veterinarian, with bills paid for by caring individuals, and taken to the Oxford-Lafayette Humane Society to start anew.

The puppy, a mixed breed who appears to have some Labrador in his DNA, was named Frazier at the OLHS. He required a second surgery, and was living at the humane society after that in need of a foster home.

As fate works out, Oxford High School senior Annabel Terry has been volunteering at the OLHS and begged her mother to come “see the dogs” one day some weeks ago. In a small cage with a bandaged neck and a sad, help-me look was Frazier, who met the eyes of Ginny Terry and daughter Annabel.

The Terry family had never fostered a dog before. They have a 10-year-old Cavalier King Charles Spaniel who has grown used to life as a single child.

But the Terrys brought Frazier home as a foster, knowing he needed help, with Dr. Cooper Terry helping tend to the dog’s wound, while Ginny and Annabel spread social messages and word-of-mouth, trying to find the puppy a home.

They don’t know for sure how old Frazier is, though the Terrys say he still “squats when he pees,” which means he “can’t be too old, can he?” They are certain he’s still of puppy-age, though, meaning there’s plenty of time for him to learn the rules of a household.

Frazier is healthy now, and recently neutered. He plays well with other dogs, save the Terry’s King Charles Spaniel who isn’t amused by the playful puppy. So, the time has come for Frazier to find a new home, since the Terry’s weren’t looking for a new dog in the first place. They just wanted to show Frazier there is a good life beyond that searing chain and death-bed fence post.

Frazier has garnered plenty of attention in recent weeks. Word of his chained-to-a-fence-post-with-a-chain-that-cut-deep-into-his-neck story has spread around Oxford, and beyond. But there’s still one big problem.

This playful dog who survived being left for dead still needs a good home.

David Magee is Publisher of The Oxford Eagle. You can reach him at david.magee@oxfordeagle.com.