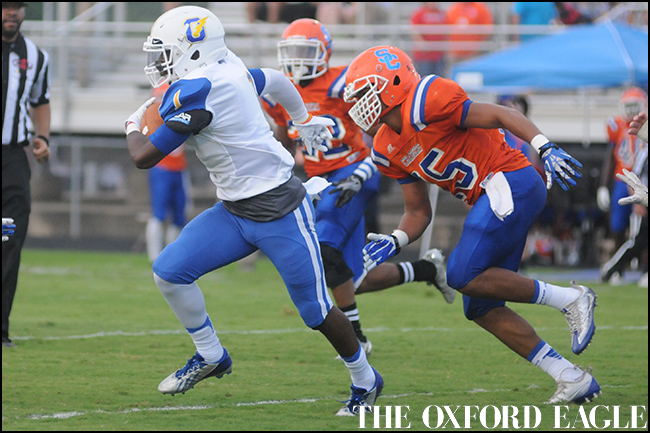 The schedule stiffens considerably this week for Hiram Wadlington (1) and the rest of the Chargers, who renew their Little Egg Bowl rivalry with defending Class 6A champion Starkville on Friday at Bobby Holcomb Field. (Davis Potter)

Oxford may have started the Chris Cutcliffe era in thrilling fashion last week, but the Chargers didn’t revel in the victory any longer than usual.

Not with what’s awaiting them this week.

Cutcliffe said coaches and players celebrated the comeback win over Southaven for a few hours before “we’d moved on” by Saturday. The level of competition will go up a notch when Oxford welcomes Starkville to Bobby Holcomb Field on Friday (7 p.m., 95.5 FM) for the annual Little Egg Bowl.

“It’s just a big game that everybody’s certainly excited about, so I think everyone moved on pretty quickly,” Cutcliffe said.

Starkville (1-0) has a wealth of talent back from last year’s Class 6A championship team and will be a stiff test for the new-look Chargers. The Yellowjackets held off defending 4A champ Noxubee County in a heavyweight bout last week to start their season with a win.

There’s also the two-game winning streak Starkville has in the Little Egg Bowl series, which hasn’t made focus a problem for Oxford during practice this week. Starkville beat the Chargers 20-7 a year ago and has doubled up Oxford 72-36 in the last two meetings.

“(The players) are not going to let a lot of things distract them while they’re trying to get ready to play this game,” Cutcliffe said.

Much like last week, Oxford’s defense will have to deal with more dual threats from Starkville’s quarterbacks. Jaquez Akins and Malik Brown both took snaps for the Yellowjackets last week with the duo combining to run the ball 18 more times (27) than they threw it (9).

But Starkville’s weapons don’t end there.

Running back K.J. Lawrence ran for a score while Tyler Stovall caught a touchdown pass for the Yellowjackets last week. Oxford will need Nick Sisk, Kent Hickinbottom and the rest of its defensive front to hold up against one of the more physical offensive lines the Chargers will line up against this season.

“The quarterback is a good runner,” Cutcliffe said. “They have some talented running backs, but their offensive line, to me, is their biggest strength because they’re big, physical and do a great job.
“(Our defensive linemen) have to step up to the challenge. I thought we played well on the defensive line against Southaven, and it’s an even bigger challenge this week to continue that against this big, talented offensive line.”

Oxford’s offense will need to do its part to help out against a Starkville defense that’s led by Willie Gay, an Ole Miss verbal commit. Oxford will have to know where the rangy outside linebacker is “at all times,” Cutcliffe said, but the Chargers will also have to deal with Starkville’s speed at every spot on the field as they try to play a cleaner game after committing three turnovers against Southaven, two of which resulted in defensive touchdowns.

“We’ve got to do a better job protecting the football,” Cutcliffe said. “That’s the No. 1 thing that stands out, and then we’ve got to be more solid in the kicking game and try to win the field-position battle, which we certainly did not do against Southaven.”

Those are requirements if the Chargers want to give themselves a realistic chance to end recent frustrations against their budding rival.

“I think both teams get pretty fired up to play this game,” Cutcliffe said. “We have been on the wrong end of it the past several years. I know our guys would love to be able to turn that around.”