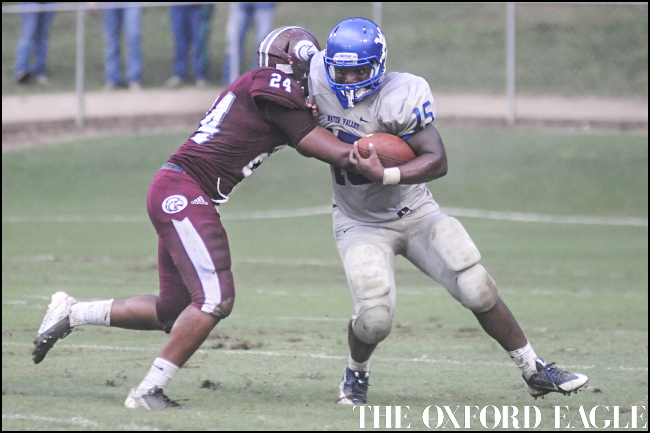 Water Valley’s Taghee James (15) will play against Coffeeville on Friday after leaving last week’s game with an injury. (Jake Thompson)

Water Valley coach Brad Embry was not pleased with how the first week of practice of the regular season went. The approach by the team at practice paired with its youth and inexperience translated into a 42-27 season-opening loss at the hands of Eupora for the second year in a row.

The Blue Devils (0-1) stay on the road this week with a trip to Coffeeville on Friday (7 p.m., 105.5 FM). Embry is in need of his team having a better week of practice or Water Valley could be staring at an 0-2 start to begin the year.

“We’re still learning how to practice,” Embry said. “I think it’s a maturity level and being tuned in and understanding what it takes. At times, we do that, but we need to get to where we can put a two-hour practice in, and when we do, we’ll be much better. When you repeat those day after day, that’s when you get really good.”

Last week’s game against Eupora started out well for the Blue Devils, jumping out to a 21-6 lead midway through the first half before momentum shifted. The defense gave up 36 unanswered points before finding the end zone again themselves.

The lack of live game experience for most of the Water Valley defense mixed with some execution problems was mostly to blame. One of those issues can be fixed quickly while the other will take time and patience on Embry and his coaching staff’s part.

“It’s just part of who we are,” Embry said. “An inexperienced team with a lot of young kids playing. … Playing a triple-option team, man, that’s what (Eupora’s offense thrives on). Playing disciplined assignment football, and we didn’t do that defensively. Offensively, we had some breakdowns in the routes and had a few bad snaps out of the shotgun. When you add those together, those are drive stoppers.”

James returns
Water Valley managed only one drive of more than 10 plays against Eupora, a 13-play drive capped by a touchdown from running back Taghee James. James left the game early after taking a shot to the chest during a tackle, but Embry said he will be ready to go come Friday night.

The defense will be tested once again with a similar exam from Coffeeville, which likes to run the triple-option offense as well.

The Pirates (0-1) fell to Calhoun City, 61-0, in last week’s opener. They will also be looking to get into the win column for the first time this season with the Railroad Rivalry trophy up for grabs. Last year at Bobby Clark Field, Water Valley reclaimed the trophy with a 34-20 win after falling to the Coffeeville on the road in 2014.

“Last year, they kind of went to more of a spread look,” Embry said of Coffeeville’s offense. “This year I think they are kind of going to get more into that triple option that Eupora ran. So that will be a challenge to see if we defend it better than we did last week.”