A hurricane and possibly a strong hurricane could strike the Gulf Coast, including flood-ravaged Louisiana in the next week, according to the latest forecasts.

Hurricane Hermine, still unorganized in the Lesser Antilles as a storm labled “invest 99L” by the National Hurricane Center, could move over South Florida as a weak hurricane or tropical storm late this week.

Weather.com reports that odds of “the second landfall as a Gulf Coast hurricane scenario has been an increasing, important trend among multiple ensemble models over the past day or two.”

Uncertainty with the storm remains and the National Hurricane Center say the disturbance has a 50 percent chance of developing into a tropical depression or storm within the next two days and 80 percent odds of doing so in the next five days. 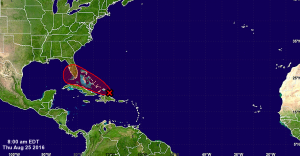 A tropical wave could become Hurricane Hermine and threaten the Gulf Coast next week.

It also appears that the high pressure system expected to develop across the Appalachians will push this system into the Gulf regardless. So, citizens in flood-ravaged Louisiana and along the Mississippi, Alabama and Florida panhandle coasts should be on alert into next week.

The best hope for Florida and the Gulf Coast are “alternate scenarios are for ‘it’ to either stall out near the central Bahamas through much of next week before eventually being picked up by the jet stream and carried out to the open Atlantic, or moving up the Florida peninsula over land, before bending northeast,” reports weather.com’s Jonathan Erdman.

That scenario is increasingly unlikely, however.